Remember the days when companies like ASUS and GIGABYTE were only known for creating market-leading motherboards and graphics cards? Well, that’s changing ever-so-slightly. Over the past five years, ASUS’ notebook market penetration has vastly grown, with the company becoming a household name in many places. GIGABYTE’s presence in the US in this way hasn’t been nearly as good, but it’s hoping to change that, and soon. 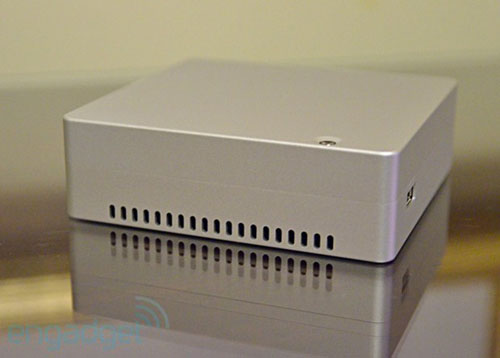 In the past handful of events, we’ve seen tablets and notebooks from GIGABYTE, but to my knowledge, almost none of them came to market in the US. That seems to be slowly changing, however, and we hope to get some GIGABYTE mobile device in, in the months ahead, to see where things stand with the company. For now though, there’s an interesting product from the company that is making its way to these shores: a tiny PC.

This yet unnamed mini-PC was spotted by the folks at Engadget during a visit to the company’s suite at CES. It’s much smaller than a Mac mini, at 0.3 liter volume, yet can still sport either an Intel Core i3, i5 or i7 processor. GIGABYTE is also able to squeeze in 8GB of DDR3 and up to a 256GB SSD into the small PC. Despite its size, it sure can pack a punch. Connectivity-wise, the PC includes dual USB ports, Ethernet and two separate HDMI ports.

Unfortunately, the system wasn’t actually able to be used at CES, but the company promises a release date of April. Pricing, not surprisingly, will come later.