Years ago, among the rising popularity of mobile computing, I began to wonder what the future would be like for boutique builders like MAINGEAR, CyberPowerPC, Puget, iBUYPOWER and others. After all, it seems that many are anxious to get away from the desktop, so what would these companies do to keep things interesting, and our interests piqued? Well, over the years, there has been quite a bit of innovation, or at least systems that are far from standard fare. The latest to catch my eye was just unveiled at CES, by iBUYPOWER. It’s called Revolt, and you’ve probably seen nothing like it. 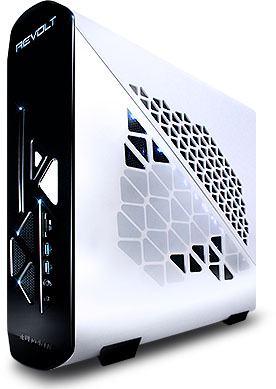 In designing the Revolt, the folks at iBUYPOWER said that they didn’t look to the market for ideas, but rather sat down and pictured what kind of PC they’d want to see sitting next to their desks. The result is something pretty striking, and almost artsy. The chassis is mid-tower in size, and features a white and black color scheme. Triangular holes are arranged on the side in a specific pattern that not only allows some air to escape, but the internal lighting as well.

It’s the lighting that could help Revolt stand out of the crowd. The company emphasizes that the lighting used here can add atmosphere to any room, and because it’s totally configurable – even in color – it’s likely that owners will find themselves spending a fair amount of time tweaking and playing around with it. 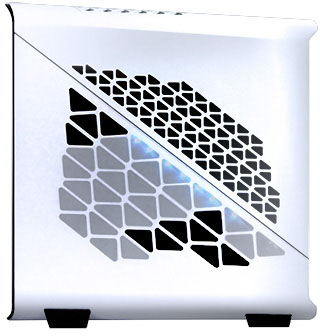 Those interested in Revolt can pre-order now, with systems shipping in February.