During its CES keynote, Intel divulged much about its upcoming products and technologies, and not surprisingly, the major focus was all on mobile. The company did however formally announce its 4th generation Core processors, based on the Haswell microarchitecture. Past that, Intel didn’t discuss too much on the technical bits, but that’s not surprising given this is a “consumer” show.

As a quick recap of what Haswell actually is, it’s a microarchitecture that falls into Intel’s “tock” phase. With its yearly product cadence, Intel’s “tick” involves a slimming-down (process-wise) of its previous microarchitecture while adding in evolutionary improvements, whereas “tock” is a brand-new microarchitecture built upon the same process as the previous “tick”. Like Ivy Bridge, Haswell will be built on a 22nm process. 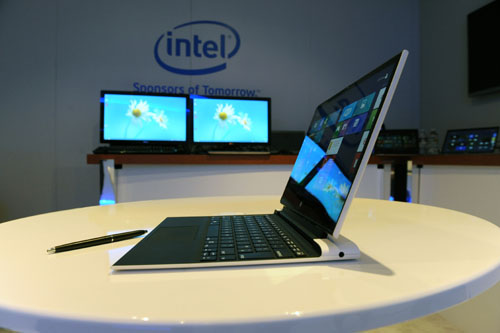 A major focus of Intel always revolves around power-efficiency, but Haswell is going to be taking things to a new level. We’ll at least be seeing a 10W part, and it’s been rumored that many parts may have the ability to idle at only a couple of watts. That said, despite the focus on low-power parts, it’s also been rumored that Haswell will prove to be far better for overclocking than Ivy Bridge – much to the relief of many an enthusiast, I’m sure.

For the first time with Intel’s mainstream processor line, Haswell will enable one-chip designs to be implemented – essentially, Haswell SoCs. That’s just the icing on the cake, though, as it’ll also introduce a new L4 cache, prove 10% faster than Ivy Bridge in many regards, bundle in the AVX2 instruction set, support transactional synchronization and for servers – support DDR4.

Haswell is expected to launch sometime in the first half of 2013.