Waaay back in 2002, Kingston patented, created and launched a DRAM tester. To put it to good use, the company followed-up with performance memory. Its branding? HyperX. To say that a lot has happened since then would be a huge understatement. Back then, memory modules were eye-popping if they were greater than 256MB in size. Today, it’s not uncommon to see enthusiasts pack 4 or 8GB modules into their rigs.

Over the years, Kingston dedicated its HyperX brand to DRAM, even though it offered other products that might have been suitable to wear the name. It wasn’t until just a couple of years ago that the company decided to branch things out, and as a result, we began to see flash storage – including SSDs – welcomed under the brand’s umbrella. A common feature of HyperX products has been their deep blue color, but Kingston hasn’t stuck to that being the “official’ color, introducing others where appropriate. In recent years, we’ve seen green, black and even red memory modules, for example. 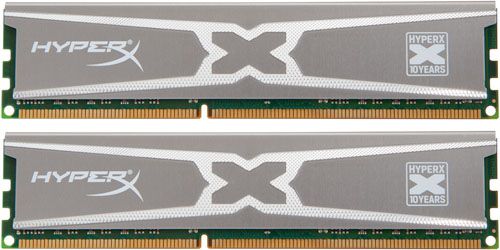 In order for a product to earn the HyperX name, it needs to be one of the highest-performing parts Kingston offers. They go through rigorous testing and exhaustive tweaking to make sure that when they hit the market, they’re the best of their class. For this reason, it’s not atypical to see Kingston’s products launch months after the competition. It’s Kingston’s way to let things brew until the recipe is perfect, then release.

To celebrate the brand, Kingston unveiled special-edition memory modules at CES. Simply called “HyperX 10th Anniversary Edition”, these modules sport a low-profile design and a gray heat-spreader with a light metallic design creating an “X” in the center. It’s a simple, yet sharp design.

Those interested in picking up a kit will have a good number of configurations to choose between. Kits come in sizes of 8 – 32GB, with single modules going as low as 4GB. Speeds range from DDR3-1600 all the way up to DDR3-2400. At the moment, pricing isn’t available, but it should be made available soon via the official product page.