Despite not having been out for too long, OCZ’s Vector SSD has already made a name for itself as one of the top-performing SSDs currently on the market. For any SSD to get much faster, it would require removing the SATA 3.0 (6Gbps) interface bottleneck, and so that is exactly what OCZ has done.

OCZ is no stranger to PCIe-based solid-state disks, as it’s already responsible for the RevoDrive and RevoHybrid among other enterprise options, and it has now put its accrued experience into the PCIe Vector design. It features two Barefoot 3 controllers linked via OCZ’s Virtualized Controller Architecture 2.0 technology. Judging by the mounting points on the PCB (and if the Revo was any indication) we suspect that models with up to four controllers may also be in the works! 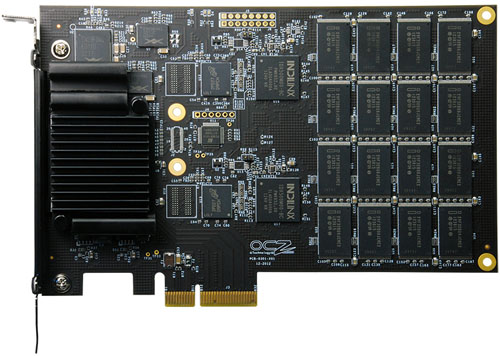 OCZ hasn’t officially disclosed much information yet (other than a press release stating that the drive exists) but that didn’t stop Legit Reviews from snagging a screenshot showing the PCIe drive’s performance. The 2-controller model looks to top out at 1GB/s reads, and easily over 900MB/s in writes – not too shabby according to ATTO.

Pricing, models, and availability is still all unknown, but OCZ has indicated the PCIe Vector will come in half-height and full-height models, and it is clear that there are mounting points on the full-size PCB for an additional daughter card which can bring the controller count up to four. Ironically enough, the PCIe Vector features a PCIe 4x 2.0 connector which may actually bottleneck four Barefoot 3s tag-teamed together as PCIe 4x has a 2GB/s max rating. But that is nothing a quick design upgrade to the PCIe 3.0 standard couldn’t easily fix. OCZ also leaked info that the PCIe Vector will be capable of 100GB worth of writes per day for 5 years, although no specific size model was listed with this figure. Further details are expected to be announced soon.