Ahead of next week’s CES, ROCCAT has announced its first mechanical gaming keyboard, dubbed “Ryos“. A couple of years ago, finding a quality mechanical keyboard was tough, but today, that’s hardly the case. In order to stand out, companies need to bring some interesting and useful features to the table in order to get noticed. On paper, Ryos sure seems to manage that.

For starters, Ryos features 100% backlighting that can be modified on a per key basis. This would allow gamers to light up only the keys they use in gaming – especially useful for MMOs. In addition, thanks to its inclusion of “up to two” 32-bit ARM processors, you’re able to equip the keyboard with up to 500 individual macros. The idea here is that if there are some keys you don’t use often in your games, you could instead dedicate them to macros. Further, under the keys and above the wrist-rest are three dedicated “Thumbster” keys. 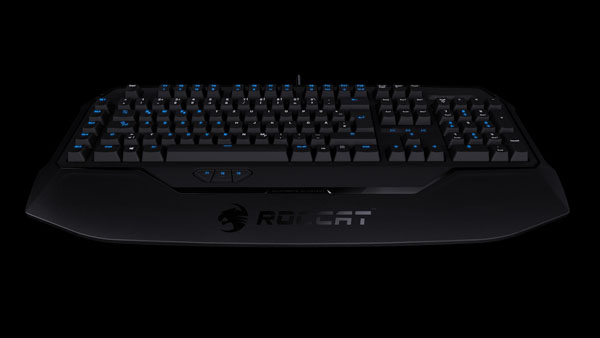 In addition to all this, the Ryos simply looks the part. It features a black color scheme that would contrast well with the bright blue backlighting. All in all, it looks like a great offering, and I can’t wait to see it come to market. Price? We’ll have to wait on that. Still not convinced? Check out the official trailer.

Alongside Ryos, ROCCAT will soon be releasing the “Power-Grid” app in its final form. This is an app that will run on multiple mobile devices and allow you to control various functions on your PC – including gaming – from your phone, tablet or what-have-you. The concept is interesting, but it will take a bit of use to understand its true potential.

To round-out ROCCAT’s CES announcements, the company has also noted that its Kone XTD and Kone Pure gaming mice have finally made their way to the US, along with its Isku FX gaming keyboard.