Crucial has unveiled the next generation of its M-family solid-state drives at this year’s CES. The M500 upgrades the Marvell controller to the 88SS9187-BLD2, which SSD aficionados may recognize as the controller from the Plextor M5 Pro drives. Crucial of course writes its own proprietary firmware for the controller, and Plextor does likewise. This time around Crucial has elected to keep the M500 branding consistent between consumer (Crucial) and enterprise (Micron) drives to minimize confusion. 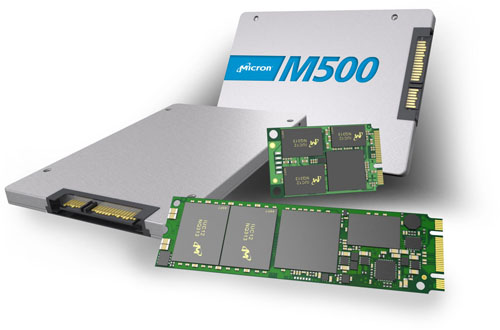 Most intriguing though would have to be Crucial’s pricing. While prices were not disclosed, Crucial indicated that it would expect to deliver an M500 960GB SSD at a price below $600, making it a very substantial discount from current SSDs on the market. It appears lower capacity models will also share the aggressive pricing. The 960GB drive actually has 1024GB of NAND inside, but Crucial has increased the over-provisioning of the drive for better sustained performance.

Right away it’s worth pointing out that the M500 almost doubles the random 4K read IOPS from 40K to 70K compared to the m4. Sequential read performance is also brought up to par with more current SSDs. Even more interesting is that unlike most SSDs which attain their best performance around the 256GB size, the M500 achieves its best read and write performance at the 480GB/960GB capacities.

The M500 will launch in 2.5”, mSATA, and M.2 (NGFF) form factors and feature a standard 3-year warranty. The 960GB model will only be available in the standard 2.5” SSD form factor. As indicated in the table, Crucial will utilize its own Micron 20-nm MLC NAND for these drives and it will be interesting to how this affects the endurance ratings of the M500 compared to those of the m4. Interestingly, all models are now 7mm in height as opposed to the typical 9.5mm SSD, and will ship with a 9.5mm adapter.