It’s amazing what a little competition can do. First it was FireWire that brought about much needed updates to the original 1.5Mbps USB spec, culminating in the venerable 480Mbps USB 2.0. Now apparently we may have Thunderbolt to thank for such a rapid update to the still very new USB 3.0 spec.

The USB 3.0 Promoter Group behind the original USB 3.0 specification has used CES 2013 to announce that it is putting forth a spec amendment for 10 gigabit-per-second data rates. For those counting, this is literally double the rate currently offered by standard USB 3.0 devices. The amendment is being put forth for industry review, with the USB 3.0 Promoter Group estimating approval of the new spec by the middle of this very year. 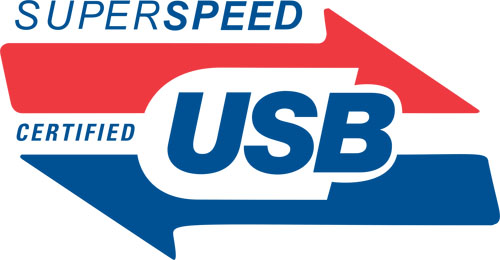 But that’s not all. The Register has quoted Brad Saunders, USB 3.0 Promoter Group chairman, as he divulged yet more details. “We are truly doubling the clock rate and we’re improving the data efficiency, so when we say that it’s twice as much bandwidth or twice the throughput, that’s conservative.” Saunders went on to elaborate, “This is not an arbitrary statement that it’s twice the speed so it’s twice as much data, this is actually twice the speed plus improved encoding to effectively guarantee that we’ll get more than twice as much,” he said. “We are, y’know, padding it.” So not only is the maximum rate doubling, but the underlying encoding scheme will be optimized to decrease overhead over previous iterations.

Of course, as with any update, both the computer and associated USB devices will have to have the new spec already built-in in order to support the higher data rates. New controllers are likely to be needed for the doubled clock rate in the new spec, and it was also noted not all current USB 3.0 cables may be capable of attaining the 10 gigabit-per-second rate.

As for what the new USB specification will be called, unfortunately that is also up in the air. When asked, Saunders explained, “Developing the brand is something we have to do in parallel with developing the spec update.” In other words, the same industry ratifying the new spec will also be deciding what, if any, changes are made to distinguish current USB 3.0 devices from future ones capable of the new standard. Hopefully they will agree upon USB 3.1 or perhaps USB 4.0 in order to prevent any confusion amongst consumers over device compatibility. As always, new iterations of the USB spec will continue to be backwards compatible with devices and cabling from previous versions.