For those that want a super-small PC that doesn’t skimp on features, ZOTAC’s ZBOX series has by far been one of the best choices out there. I’m constantly impressed by just how much functionality the company manages to squeeze into these little boxes, and with its third-generation just announced at CES, things are only improved further. 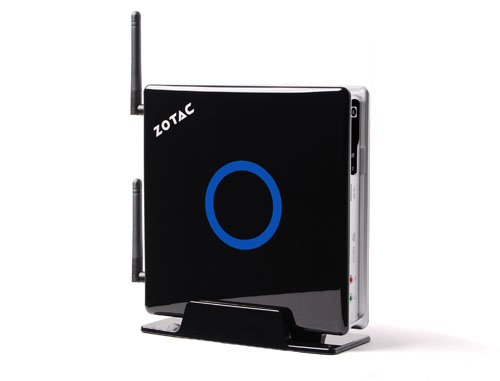 The biggest difference between the third-gen “ID42” models and the previous-gen is the addition of NVIDIA GeForce GT 610 graphics. While hardly a powerful GPU by any stretch, some may prefer it over Intel’s HD 4000 found in the second-generation ZBOX, if not for anything else but compatibility with certain games.

Alongside those graphics, ZOTAC employs a dual-core Intel Core processor which runs at 1.1GHz, 4GB of DDR3, a 500GB 5400RPM hard drive, 2x Gigabit Ethernet ports (which can be teamed), on-board 802.11n WiFi, Bluetooth 4.0, 2x USB 2.0 ports, 2x USB 3.0 ports, headphone / microphone audio jacks along with S/PDIF and finally, an HDMI port. ZOTAC doesn’t ship an OS with its ZBOXes, but officially-supported OSes include Windows 7 and 8.

Because of the improved hardware, ZOTAC had to increase the thickness of the third-generation ZBOX ever-so-slightly – +7mm to be exact. Considering the improvements, I’d say that this increase in thickness is worth it.

As is a common theme with any CES, pricing and a release date hasn’t been announced yet.