I’m not sure what kind of daze I was in during the last week of 2013, but I somehow missed the fact that a crop circle shaped like a computer chip surfaced in Salinas, California. Well, before wrapping-up his presentation at CES, NVIDIA CEO Jen-Hsun Huang admitted that his marketing team was behind the stunt – and quite an interesting stunt it was.

As the story goes, Jen-Hsun asked his team to market Tegra K1 in a unique way, but there was one major limitation: No money could be spent. So, the marketing team cranked up their creative juices, found a barley field that wouldn’t be harvested again this season, and replicated the Tegra K1 processor inside of a circle. The result is impressive: 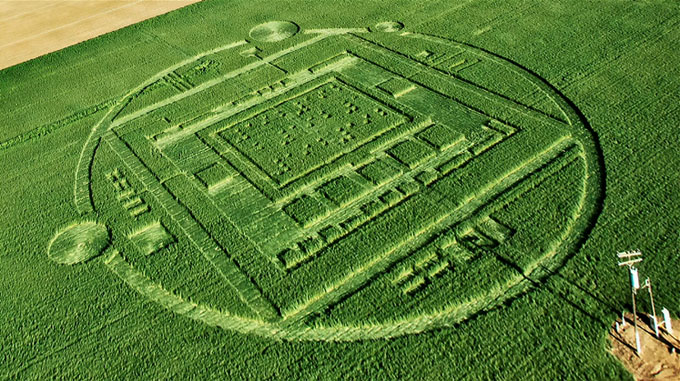 After the crop circle was completed, NVIDIA kept mum, just to see what would transpire. As it turns out, the world noticed, and even major news stations like CNN reported on it. One of the best news stories came from a woman who discovered that the inner-most square had something written in Braille: “192”, over, and over. She wasn’t too sure about what it could have referred to.

Thanks to the announcement of NVIDIA’s Tegra K1 last night, we can see that “192” is the number of CUDA cores the chip features. The crop circle in itself was creative; but adding such a hidden message like “192” makes it all the more amazing.

For a look at all that Tegra K1 brings to the table (and believe me, there’s a lot to talk about), be sure to check out our in-depth look.