Corsair wowed us with several items in its private suite. It had a couple of new chassis, a DIY PC kit, and a family of SFF PSUs that are designed for the aforementioned DIY PC kit but can be used for small form factor systems. We covered the press release earlier this week, but managed to get some hands-on time at Corsair’s CES Booth. 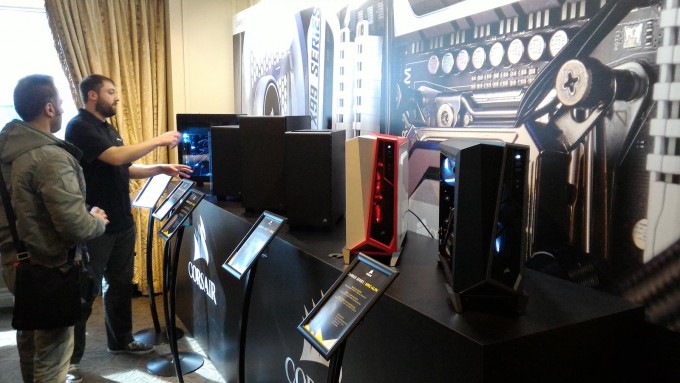 The SPEC-ALPHA gamer chassis features windowed side panels, aggressive styling, and an integrated three-speed fan controller. Corsair says that SPEC-ALPHA is meant both for consumers and for system integrators (i.e., individuals and companies that build custom PCs for end-users). Of interest for system integrators specifically is the capability to customize color and trim options to suit. So if a system integrator wants a run of say, a white body with red trim, Corsair can accommodate that. This option, though, is not available for consumers. Well, not yet, anyway. SPEC-ALPHA is priced at $79.99. 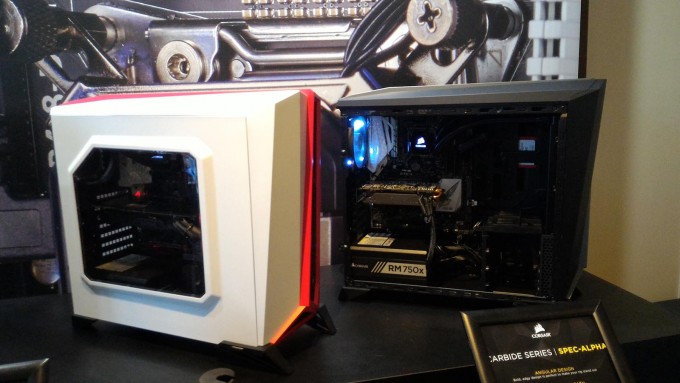 Also on display were the Carbide 600Q/C chassis. Both chassis are essentially identical, the only difference being the Q variant having a windowed side panel, while the C has an opaque one. The C does have sound dampening material in it. The Carbide 600 is most interesting, though, because it is an inverted ATX interior layout. Techgage is finishing up its review of the Carbide 600Q, so keep your eyes open for it.

Techgage asked if Corsair has any plans to introduce an upsized version of the 600Q/C, one that could accommodate 480mm/560mm radiators, and the company says that it hasn’t ruled out such an option. This writer, for one, would love to see Corsair go in that direction. 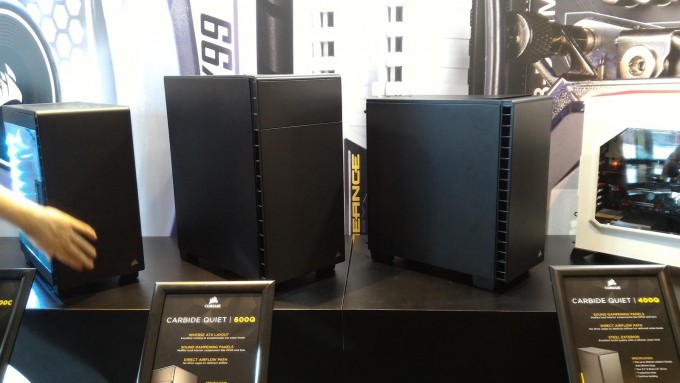 Finally, the Carbide 400Q/C twins were also on display. The Carbide 400 is essentially the 600’s little sister. It has a similar design philosophy as the 600, but it eschews the inverted ATX interior layout. Carbide 400Q/C has just launched, with MSRP being $99.95. 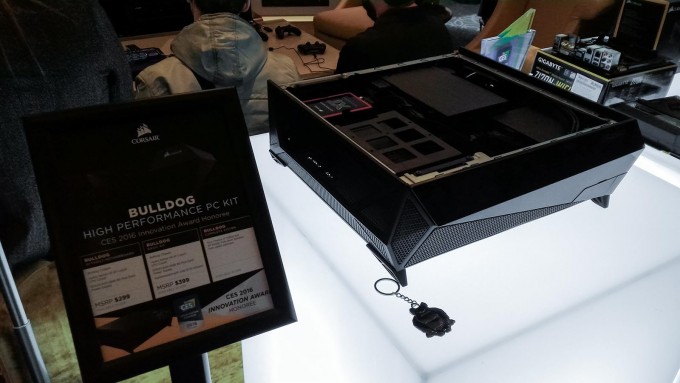 Corsair also showed off its Bulldog DIY PC kit. The concept behind Bulldog is to enable users to have a gaming PC that could exist in a home theater setup. Corsair’s Bulldog product line includes a chassis for mini-ITX systems, AIO liquid cooling systems for both the CPU and the GPU, and a small form factor PSU designed specifically for Bulldog. Users can buy the components separately, as a complete kit (the user only needs to buy the motherboard, CPU, RAM, and storage devices), or buy a complete system through selected retailers. Corsair mentioned Microcenter as a retailer which will be selling full Bulldog systems. Prices, of course, will vary according to the hardware specs of the system. 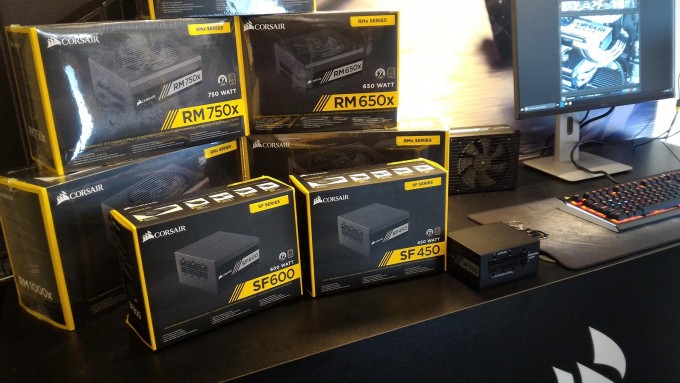 Of particular interest in the Bulldog DIY ecosystem is the SF-series PSUs. These PSUs are approximately the size of a Roku box; the SF600, which I held in my hand, is a jewel. It is fully-modular, produces 600W, and features 80 Plus Gold certification.
Very impressive, Corsair. Most impressive.