Over the past week or so, two of the most common benchmarks we test with for our CPU and GPU reviews have released updates – and if you happen to love benchmarking, you may want to jump on them. The first is Maxon’s Cinebench, which has been updated to the latest R23 engine. As before, this benchmark doesn’t test out the GPU at all, as Cinema 4D is really geared towards the CPU. Interestingly, this new Cinebench already supports Apple’s just-released M1 processor.

The latest Cinebench has a few notable changes, starting with the fact that the benchmark is run for 10 minutes by default. This is done so that the CPU will actually get warm (or hot), and the end result could be trusted a bit more. Unfortunately, this 10 minute default timer even applies to single-thread testing, although you have the option to tweak the number of minutes to run if 10 is too long (but don’t expect the same end result).

For our benchmarking, we’re going to leave Cinebench to its default settings, as we do like the idea of the CPU heating up and generating a more reliable result (we also test real Cinema 4D, which can take just as long, processor-depending.) In our tests so far on a couple of different processors, running the default 10 minute test will result in really good accuracy, with well under 1% variance for either single- or multi-core testing.

As for V-Ray, Chaos Group has finally updated its standalone benchmark to reflect the latest V-Ray 5 engine. Whereas the previous version could only test CUDA and heterogeneous rendering, this latest build does that and adds RTX to the mix (as we’d expect). You can also log into your Chaos Group profile and submit and manage your results online. 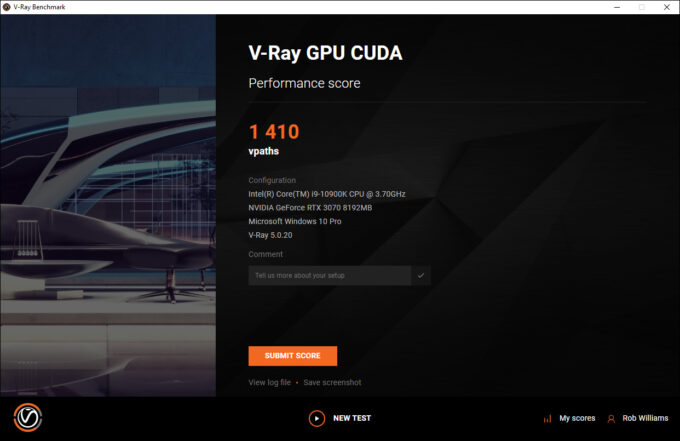 So far, we’ve had hit-or-miss success with this benchmark. On one machine, we completed our testing fine, but on another, the benchmark would fail to open (with either the GUI or CLI version). We’re not sure if we’re overlooking something that could be fixed, but because of this issue, we have to pass over integrating it into our test suite for the time-being.

On that note, we’ve been hard at work benchmarking plenty of processors, including CPUs. But because of AMD’s upcoming Radeon launch, our time spent on CPU testing has had to shift to GPU in order to hit the upcoming embargo. Once we do get our workstation CPU look up of Zen 3, we’ll include the latest Cinebench, in addition to the real Cinema 4D and the rest of the fleet.

And with that, it’s time yet again to get back to benchmarking…