CoolIT Releases Affordable Liquid-Cooling for CPUs with the Domino

This might be the day to launch new cooling products, because in the previous post, we took a look at Sapphire’s latest GPU solution, while here, we’ll check out CoolIT’s new Domino CPU cooler. CoolIT is a company that immediately become well-known throughout the industry with their first products, because their coolers were robust, performed better than water-cooling setups, and helped overclockers push their CPUs just a little bit harder.

Today, the Alberta-based company unveils their “Domino”, an “Advanced Liquid Cooling” product for the masses, which retails just a bit higher than some of the top-of-the-line air coolers, at $79. You read that right… liquid CPU cooling for $79. You’d expect the product to look entirely lackluster for a price like that, but it’s quite the opposite.

CoolIT has kept a few goals in mind when designing the Domino, including simple installation, advanced configuration, quiet operation, and reliability. Given the price, you wouldn’t expect an LCD display, but there’s one here, which reports the temperature and radiator fan speed. It goes without saying that CoolIT’s own higher-end products would perform better than the Domino, but for what amounts to $20 more than Thermalright’s Ultra-120, it seems like a great deal. We’re currently putting the Domino to the test in our labs, so we’ll let you guys know soon just what it’s made of. 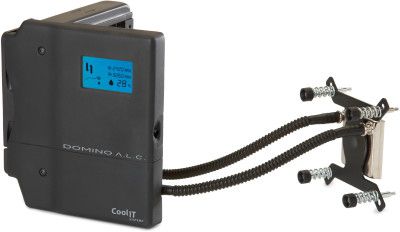 “Domino was designed for the PC Gamer looking to build a high performance rig with maximum value” remarks Geoff Lyon, CEO of CoolIT Systems. “For the same cost as most heatsink/fan combinations, PC Enthusiasts can now have an advanced liquid cooling solution that maximizes CPU performance, minimizes noise and facilitates complete domination in the gaming arena of choice.”