Corsair has just launched a new gaming monitor, and hoo boy, is it a beauty. Catering to those who love ultrawide aspect ratios and a large display, Corsair’s new Xeneon Flex (45WQHD240) comes in at 45 inches, which is a huge increase in size compared to most monitors shipping with 3440×1440 resolution – typically around 34 inches (effectively giving the Xeneon Flex 81% more screen area). Catering also to high-refresh gamers, the Xeneon Flex boasts a refresh rate of 240Hz.

Those specs sound great, but somehow don’t seem quite as interesting as another design cue of this monitor: it bends. Depending on what you’re in the mood for, you can either keep the panel pushed back to make the monitor entirely flat, or you can pull its edges outward for a curvature up to 800R. 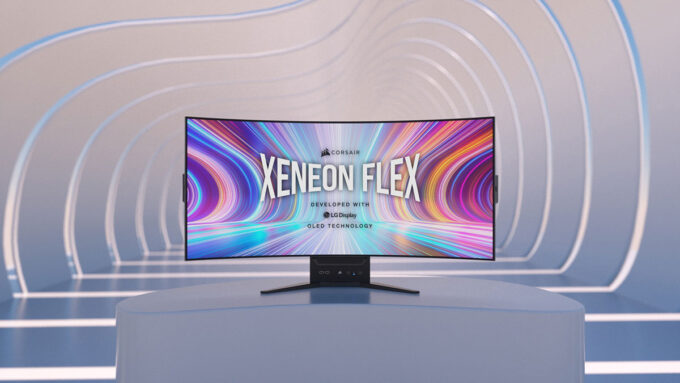 Corsair partnered with LG on this monitor, so we can assume that its panel is similar to the one in LG’s own 45-inch 45GR95QE, which, perhaps not-so-coincidentally, was also announced today. That LG monitor supports the same resolution and refresh rate, but we did spot two changes: it’s not bendable, and LG claims a 0.1ms gray-to-gray response time, whereas Corsair somehow whittled it down to 0.03ms.

We’re not sure how important it will be to people that their monitor can bend, but it’s undoubtedly a neat feature, and is one that could potentially make it safer to transport a curved ultrawide – because it can become an uncurved ultrawide in a couple of seconds.

Corsair says that this display has built-in burn-in protection, and that it carries a three-year burn-in and dead pixel warranty – great perks for a monitor we’re sure isn’t going to be cheap. If you’re at Gamescom this week, you’ll be able to spot demos of the monitor there. If you’re wanting to buy one once they become available, you’ll be waiting a little bit, as more information is planned to release “later in 2022”.

The official product page is light on some specific information, but those wanting to be alerted to its release, or additional information coming out, can sign up for email notifications.