At CES 2019, Corsair showed off some its latest projects. Up first were three new mice to be released over the coming year, including a new wireless series that we’re going to see spread out into its own series.

Slipstream took a fair bit of focus as it’s a project that Corsair has been working on for a while. It’s a wireless standard that makes use of double data packets per USB interrupt to reduce response times, but there is also a frequency hopping trick to get around wireless interference. Slipstream will also allow up to three devices to connect to the same receiver.

The first peripheral to make use of Slipstream is the HARPOON wireless mouse that turned a few heads. Normally when a new flagship tech comes out from a company, it usually comes with a flagship peripheral to showcase it. In this instance, Corsair has decided to make use of this new wireless tech on its cheapest new peripheral. 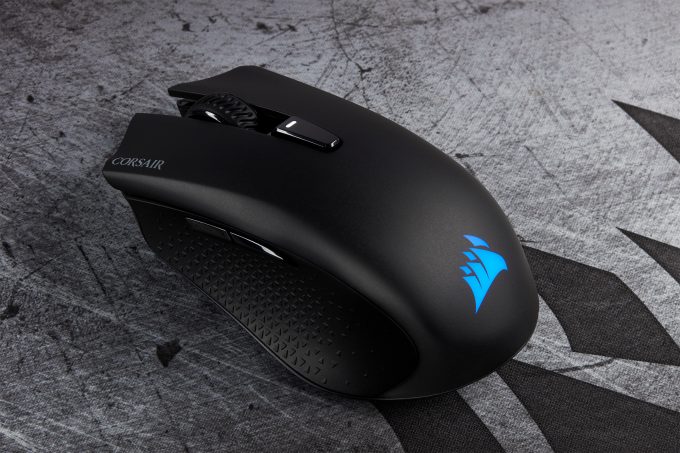 The HARPOON is a 6-button wireless mouse that weighs just 99g, and packs a 30-60 hour battery life, depending on whether it uses the Slipstream wireless or Bluetooth (it can switch modes making it a more universal wireless mouse). The battery is a fixed lithium-polymer battery that is not user serviceable (although I’m sure a soldering iron could do it), rather than using rechargeable AA batteries, but this was done to reduce the weight. At $50, it’s not a bad price for what’s on offer, and we’ll see the range expand over time.

On show was two other mice, including the IRONCLAW and M65 RGB Elite, both of which have the 18,000 DPI PMW3391 sensor by Pixart. They’ve both had weight reductions by a few grams, while the M65 keeps its now iconic aluminum body. The IRONCLAW is, as its name suggests, a claw grip style for people with larger hands.

Corsair also showed off its next big phase of RGB, by really turning the dial-up to 11. Apparently, sticking LEDs on a PCB isn’t good enough for Corsair, so it had to go one step further and put RGB right in the PCB – we’re not joking. 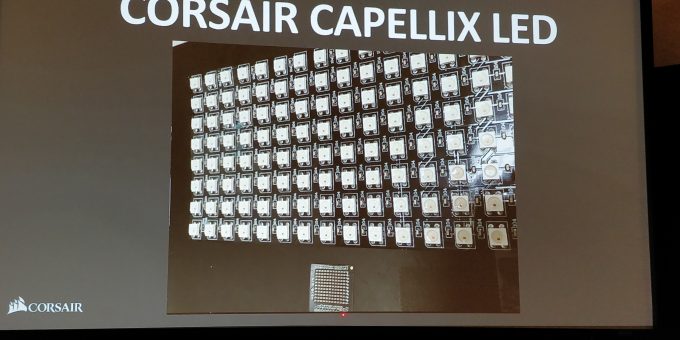 In a process similar to how TVs are made, Corsair is making the PCB part of the RGB experience by embedding the LEDs right into the PCB during manufacture, creating what it calls Capellix. This results in a massive increase in RGB density, since there is no need for focusing lenses. The company can fit a 4×4 grid of these embedded PCB LEDs in the same space as a 1010 LED.

The first product to enjoy the is new LED matrix effect will be its DOMINATOR Platinum memory, but we expect to see these LED effects cropping up across other products, such as keyboards and fans, in the near future.