Looking back a few years, I don’t remember many companies branching out of their main product line too much, but things have certainly changed since then With Corsair in particular, we’ve seen various products come out, including their widely-successful PSU line-up, and also their cooling products, which range from the DOMINATOR air RAM fan to the memory water-block.

At Computex, the company has announced their latest entry to the CPU cooler market with the Hydro H50. For the sake of comparison, they’re pitting the H50 to the Thermalright Ultra-120, and in their tests (and seen in live demos), their cooler can out-perform the Thermalright by around 15°C, and sometimes even higher. 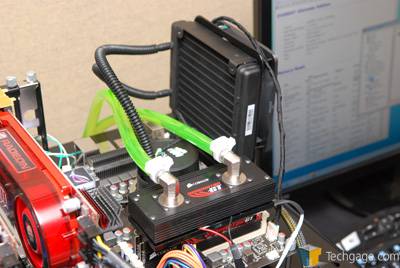 While the Thermalright cooler is air-based, the H50 from Corsair is a self-contained water-cooling unit. At its core, it’s an Asetek cooler, but Corsair worked with the company for over six months to get the H50 to where it is today, and it works very well. Compared to some air coolers, it’s quite silent, and for the $80 price-tag, it’s a great option for pretty-much anyone.

In the live demo, two identical machines (aside from the cooler) were running the i7-975 Extreme Edition processor at 4.0GHz, and while the CPU under the Thermalright crashed every half-hour or so, I saw that the H50 was running stable for over six hours, and at around 65°C. That’s incredible for an $80 cooler!