There are such people as fan enthusiasts. No, really. For something as seemingly prosaic as cooling fans, it seems weird that there are people who go ga-ga over these things with rotor blades and a motor. I should know: I used to spend hours testing lots of them for their performance on a given heatsink.

Well, Cougar has introduced its new Dual X line of fans. Available in both 120mm and 140mm sizes, these fans boast eye-catching styling and design features that enhance not only their functionality, but also performance and reliability.

There’s no question these new fans are eye-catching. For some system builders, that’s a must-have feature. They’re available in four colors: Red, Green, Blue, and Black – all but the Black version have LEDs on them of the same color as the blades. The fan frame itself is also stylish; it’s not just a square-shaped frame as it is on most fans. The Dual X’s frame is more rounded, with ears at the corners where the mounting posts would be. Also notable is that for all but the black fans, the frame is translucent and smoke grey-colored. The black fan’s frame is simply, well, black.

The fan’s nine blades are also quite pretty. Cougar touts them as having a “dual-layer rigid blade design” capable of “generating a more powerful airflow, air pressure, and decreased wind shear noise.” And aside from the blades’ stylish appearance, they also have the company’s “Diversion Claws Design” as well, which is meant to “provide focused airflow” and reduce noise-producing turbulence. 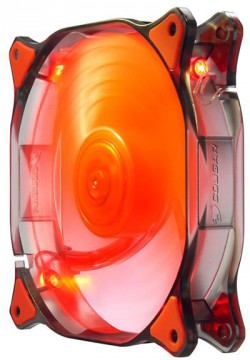 And speaking of noise-reduction, there are two more salient features worth mentioning. First, the fans come with an anti-vibration pad. Allied with the aforementioned aerodynamic features on the blades themselves, the new Dual Xs should be quiet during operation. Second, the Advanced Hydraulic Bearing on the Dual Xs should not only reduce operational noise, they should also confer them with a longer service life.

If Cougar can deliver on all it promises with the new Dual Xs, I’m sure it’ll earn itself a lot of new fans. They’ll also probably earn a lot of money from these new fans of their new fans. Want some? They’ll soon be available for $19.99 a pop. Full specs can be found on the official site.