A great thing for Linux is that its popularity is rapidly growing, and thanks to the countless number of “Live CDs” out there, anyone can download and burn an image to allow them to test drive a distro with no risk to their PC. But, what about those who either don’t have blank CDs lying around, or don’t have an optical drive installed in their PC?

Although it’d be nice, not all distros copy over to a thumb drive quite the same way, so while you may master one, it doesn’t necessarily mean you’ll be fine with another. In particular, both Ubuntu and openSUSE require different steps, and it’s a pain for new and experienced users alike to have to read into the different schemes in order to pull off something that should be simple.

Even me, someone who doesn’t mind technical things, can get annoyed with all of the different schemes out there, so it’s with a huge sigh of relief that I discovered a tool called “Universal USB Installer”, a software tool from PendriveLinux.com that makes it easy for anyone to create a bootable Linux thumb drive – as long as you’re running Windows.

There are a couple of things that make this tool so great. One, it’s updated with new entries often, and two, it doesn’t need to be installed on your PC. It looks like an installer, but that’s actually the entire application. You simply run it, choose whichever options you need to, create the thumb drive, and then that’s it. Here’s the main view: 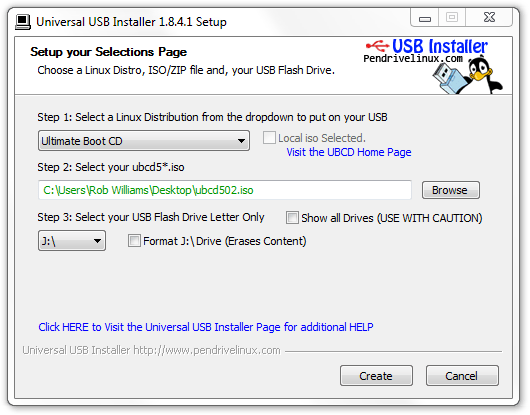 It’s simple, but that’s all it needs to be. The drop-down list has many Linux-related entries, including Ubuntu and a mass of derivatives, Debian, Backtrack, Puppy, Arch, CentOS, Gentoo, GParted, Fedora, Jolicloud, Sabayon Linux, SLAX, PCLinuxOS, MEPIS, Ultimate Boot CD (the reason I discovered the tool) and so much more. It even supports creating a Windows Vista/7 bootable thumb drive, and somehow makes that possible with the same Linux-based syslinux/isolinux boot-loader!

After making your choice and then browsing to the CD image, you can choose the drive letter of the thumb drive you want to copy the files to, and then click “Create”. If you don’t happen to have the ISO of whichever distro you chose downloaded, you’ll be able to check a box that will automatically begin downloading it from a pre-defined server. Also, in most cases, the data on your thumb drive will not be affected, but it’d still be recommended to back it up just in case.

Once the “Create” button is clicked, you’ll be warned about the MBR of the device being overwritten, and in some cases, also the data. If your thumb drive is in a different file system than a bootable drive should be, it might complain, but most often, you’ll be fine. By default, Universal USB Installer will format thumb drives to FAT32, which is to be expected. 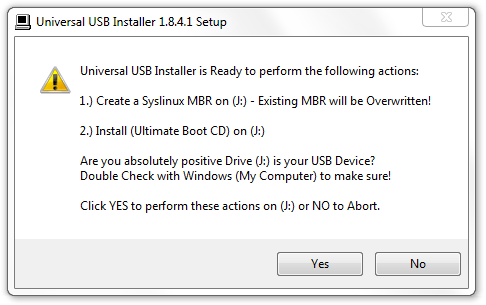 Once the process begins, the tool will automatically create the proper bootloader, and then extract the files from the selected ISO over to the drive. Once that’s done, you’re effectively ready to use your drive in any PC you need to! 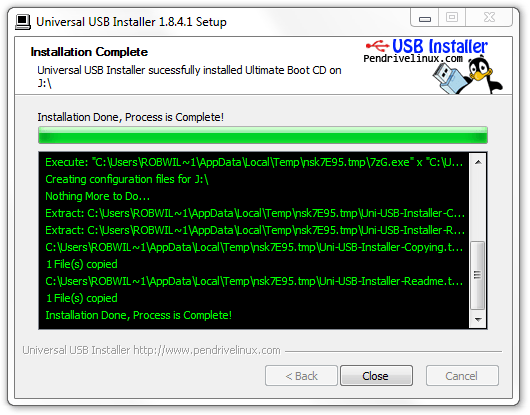 To test the tool out, I grabbed three random thumb drives (Kingston 8GB x 2 and CENTON 8GB), and three different OSes to boot. I chose Ultimate Boot CD, since that’s what I needed from the get go, Ubuntu 11.04 and also Windows 7. Without fail, each one of these booted on two different machines, which I admit I was rather impressed by, given that I had so much trouble in the past when doing things manually.

For those who want to create a bootable thumb drive of any Linux distro – or even Windows, this tool should not be avoided. It’s simple, doesn’t need to be installed, is kept up to date, and works. It’s definitely now a part of my toolbox.