With only five days to go until the start of CES 2018, Dell is wasting no time in making its own announcements. Using CES 2012 to unveil its original XPS 13, Dell is using this CES to usher in a reimagining of the notebook. Taking a cue from the fashion industry, where rose gold remains a trending color, and white accents have been growing in popularity, Dell’s latest XPS 13 represents the design goal of creating a product that looks good now, and on day 1,000.

Any company can say that their product is going to look good for the ages, but Dell put considerable effort into assuring that’s the case with its latest XPS 13. The company says that it’s spent 11,520 hours and 50 trials to create the latest iteration, ensuring quality both inside and out.

But let’s talk more about the outside. The palm rest is composed of a crystalline silica material that’s woven with white color throughout its 9 layers. Dell says this gives strength and reduced weight. We’ll be meeting with Dell this forthcoming week, so we look forward to being able take one for a “touch drive”.

Cool facts are the name of Dell’s game right now, so, DID YOU KNOW? that the glass fibers used in the latest XPS 13’s palm rest are long enough to wrap around the world five times? That’s 117,500 miles – half-way to the moon. In total, 13 people worked on the design over 16 months. 10 fabrics, 45 layups, and 30 models were worked on. Ultimately, 50 trials led to the finished product. 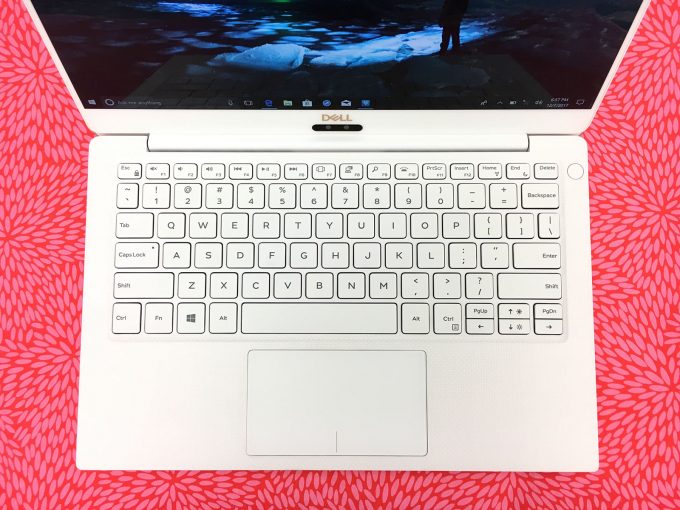 With the latest XPS iteration, Dell claims to be the first to use “Gore Thermal Insulation”, which sound like something we’d need a DOOM cheat code to enable, but no. It’s in effect insulation that covers important components and improves the efficiency of heat transfer. In a small notebook, these kinds of improvements are notable. The silica gels used here have also been used in extreme engineering environments, such as Mars Rovers, per Dell.

It’s impossible to cover everything there is to know about this notebook, so we’d recommend hitting up the official website to learn everything you need to. For hardware basics, the XPS 13 includes a Core i5 as default, which can be updated to Core i7 (8550U). It’ll support up to 16GB of memory, a 1TB PCIe SSD, and for a super crisp image, it’ll also offer the option of a 4K resolution with 100% sRGB color coverage.