Do I Have the Worst Luck with Hardware?

That’s the question I have to ask. I hate to rant in our news section, but sometimes, I can’t help it. I’ve posted in recent weeks about the complications of benchmarking, because as soon as you think something is going well, you might hit a huge roadblock that stops you right in your tracks. Some fixes are easier than others, but more often than not, I hit something that wastes a lot of time, and it’s beyond frustrating.

Two weeks ago, for example, I posted about some complications I was having with regards to testing the P55 motherboards we have on-hand. In the end, the problem was my fault, and I felt like an idiot for overlooking something so simple. But when you are behind schedule, and trying to rush to get things done, your mind begins to short-circuit and you don’t make the wisest decisions or take the time to sit back and actually look at things as they are.

Earlier this week, I thought my problems were behind me. Things were going well, and for the first time in a while, I finally felt like I was on a roll, and that the rest of the week, and weeks to come, would be rich with content. Well, there’s clearly some mysterious force that doesn’t want me to ever get ahead, because that very evening, the hard drive in my main system crashed. For what it’s worth, it was a Seagate Barracuda 7200.11 500GB with a total power-on of 15,500 hours. The drive is under warranty, but that doesn’t do much to mend the frustration.

See, it’s funny. Although I religiously use a superb system backup problem for our benchmarking machines, I’ve been lazy in getting around to backing up my own machine (both Linux and Windows) in case a problem like this ever arose. I didn’t lose any data, but since I use a rather complex version of Linux, I wasn’t looking forward to spending a whack of time on the installation process. Luckily, I did get things up running sooner than I thought, and my PC is now better than ever. I took the opportunity to give KDE 4 an honest go, and you can see the results of that in a newly-published article here. 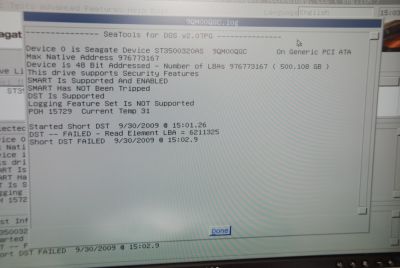 Have you ever run into a computer problem and wanted so bad for it to be something minor, rather than major, so you trouble-shoot for hours in hopes you’ll come out ahead? Well, that was the case with me here. I knew the hard drive had a problem, but then I thought… “What if it’s the S-ATA cable, or the port?”. I swapped out the S-ATA cable, and had far better luck with it, oddly enough, but Seagate’s SeaTools still gave errors. I swapped out for yet another S-ATA cable, and SeaTools passed its tests many times over. I thought maybe it was indeed the cable.

Of course, five or six hours after I began troubleshooting, I realized that the drive was a lost cause, and I was only wasting time rather than trying to make the lost time as minimal as possible. I installed a replacement drive, installed my operating systems and as I type this, the machine is working great. It wasn’t the motherboard, or the cables… it was 100% the hard drive. Time to fill out that RMA form…