Apple is no stranger to developing chips, and for quite some time, its offerings have been impressive from a power efficiency and performance standpoint. On mobile, it’s hard to beat Apple’s chips on the single-thread front, a perk carried over to the notebook- and desktop-bound M1 with its release late last year. From the get-to, and to date, the M1 has been impressive, wowing many who underestimated what Apple could pull off.

While Apple’s M1 isn’t catering to the high-end crowd, the level of performance it offers the every day user is impressive, especially from the perspective of power efficiency. Right now, it seems like the world really is focusing on the M1; it’s the chip to beat, and the latest Dolphin development report manages to keep the excitement going. 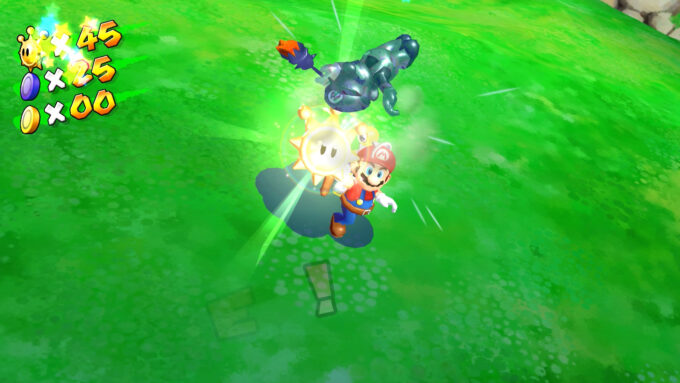 Dolphin is an emulator for use with Nintendo GameCube and Wii titles, and has long included a built-in benchmark, proving that performance is really important to emulation. We actually dug Dolphin out for the first time in a while this past weekend, to play some TimeSplitters 2, and we can honestly say it’s a breeze to set up and use. No external BIOSes needed; just load it up, adjust graphics (if needed), configure the gamepad, and load the game ISO. That’s it.

Since the launch of Apple’s M1, Dolphin’s developers have been keen to get the software running on the new silicon, and at this point, the Arm-specific build is now almost at feature parity with the x86_64 version. Best of all? The performance is fantastic, delivering great frame rates compared to other systems: 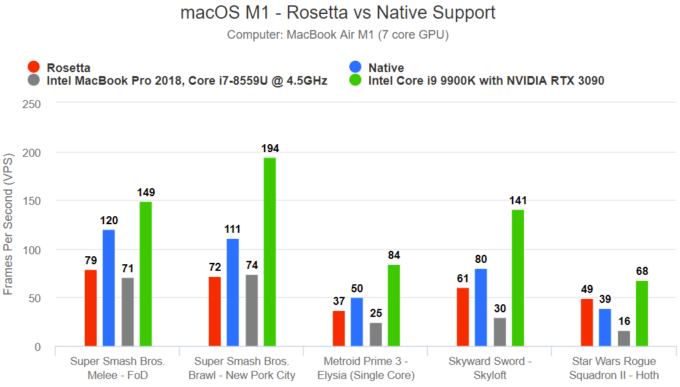 In the chart above, you can see that the M1-based MacBook Air offers much better frame rates than a three-year-old Intel MacBook Pro (Core i7-8559U), and if that’s not impressive enough, the solution doesn’t sit nearly as far back as you’d expect when compared to a full-fledged gaming PC equipped with GeForce RTX 3090.

It’s interesting to point out that even through the Rosetta layer, the x86_64 version of Dolphin still delivers really good frame rates. In the case of Star Wars Rogue Squadron II, it’s actually a bit slower to run natively, only because that version currently lacks the memchecks instruction that is used by full MMU titles (Spider-Man 2 is another one of those.)

It’s undoubtedly impressive that the M1 can run emulated games so well, but it’s perhaps most notable that it manages to do it with so much less power than the alternatives. In another graph supplied in the article, it’s shown that the M1 can deliver 8.94 frames per watt, whereas the three-year-old Intel MacBook hits a meager 1.38 frames per watt. The gaming PC equipped with RTX 3090 hits 0.79 frames per watt.

Overall, it’s great to see M1 performing so well, and also see that Dolphin supports it so well already. If you own an M1 device and want to jump on testing the latest Dolphin out, you can snag it from the official download page.