EA began its Online Pass program several years ago; I first encountered it in Dragon Age 2 on the PC in 2011. The purpose of it was to obtain a small measure of profit from the trade-in market, which is insanely popular with console games. Anyone who has played a modern PC game knows that we are already hassled by a CD key that binds us to an account, thus it was redundant for us.

According to GamesBeat, EA Senior Director of Corporate Communications, John Reseburg, said: “Yes, we’re discontinuing Online Pass. None of our new EA titles will include that feature.” The Online Pass program was never well received but Mr. Reseburg explains why EA went away from it: “Initially launched as an effort to package a full menu of online content and services, many players didn’t respond to the format. We’ve listened to the feedback and decided to do away with it moving forward.” 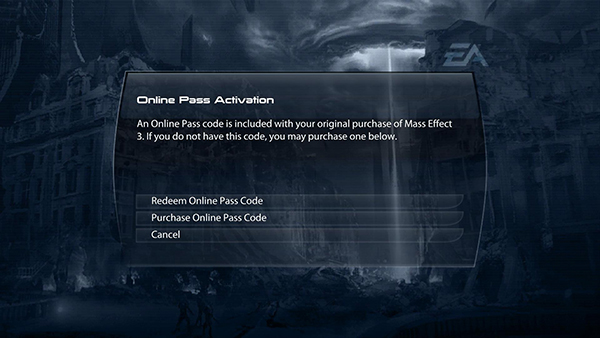 This is a win for the used game market business and gamers alike, especially for those who cannot always afford a new $60 game. I do appreciate that EA is listening to its customers, but I can’t help but think this was more motivated by its loss in revenue it saw earlier this year. I speculate that EA was making more from gamers when they didn’t have to pay for this key; thus gamers would grab as much DLC as they could to complete their experience.

I generally try to take things at face value but I worry that EA has something else just as intrusive in the works with next generation consoles being released later this year. What do you think –  is this a positive move for the industry, do you think EA is changing its tactics for a new generation or do you think I am worrying too much? Tell us what you think below.