For enthusiasts, one of the biggest drawbacks to an Apple computer is the limitations of hardware. You can’t purchase a Mac and throw whatever you want in there, and as a result, even models like the MacPro can leave a bit to be desired in certain areas. One of the most notable limitations is with the selection of graphics cards, but soon, that will change.

High-end cards on Macs is something humorous, because they simply haven’t existed. To my knowledge, the last truly high-end GPU offering on the Mac was either the 7800 GTX or 8800 GTX, but within the next month or two, Apple gamers will be able to toss a very-fast GTX 285 in their rig, offering some incredible performance for any of today’s games. 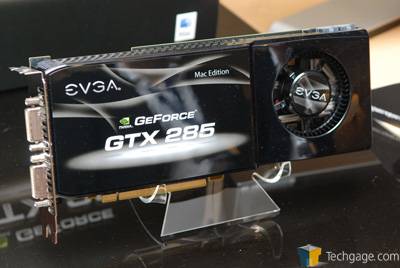 “Oh boy, here comes a huge price premium!” That’s what I thought as well, but EVGA assured me that the pricing difference wouldn’t be huge, but it’d certainly be a little bit higher than the PC variant. It’s also important to note that while the game selection on Macs is undoubtedly lacking, anyone who runs a Mac with this card could experience PC-equivalent graphics in their games when running Windows through Bootcamp. It looks like you can finally be a Mac user and high-end gamer all at the same time!

For the time-being, this card is EVGA-exclusive, and I’d expect it to remain as such for a little while. And in case you are led to believe that this card would be identical to the PC version, only with a different BIOS, that’s not the case. Believe it or not, the card’s circuitry actually has to be adjusted in order to suit the Mac operating system. That’s likely a good reason why we don’t see more hardware support on that platform at this point in time.