Since CES, EVGA’s SR-2 motherboard has been the focus of much hype, and for good reason. For one, the board is simply huge, and two, it offers a lot of things that normal enthusiast offerings do not. The most important feature of course being the dual-processor support. Unlike any other DP motherboard, the SR-2 redefines high-end, and it’s in all regards drool-worthy.

In the company’s suite at the Hyatt hotel in Taipei, it’s showing off an optimum configuration using the SR-2 board as a base. In an EVGA chassis (yes, an EVGA chassis), the board is installed along with two high-end Gulftown processors, 48GB of RAM and 4x GeForce GTX 470 (could have been GTX 480, but it doesn’t look like these cards are quite long enough). 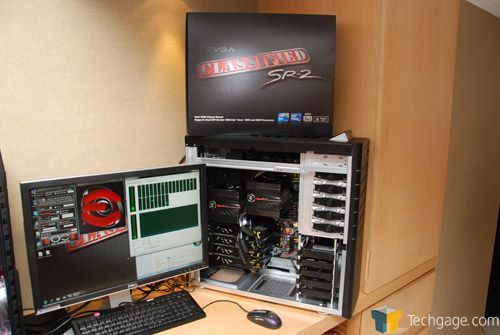 Since the SR-2 motherboard is just so dang big, finding the right chassis is just far too complicated. There are a couple out there, but neither are that impressive, in my opinion. To remedy the situation, EVGA decided to take on the task of “building” its own chassis (building atop an already existing Cooler Master chassis) to support the beast.

It’s obvious that those who purchase an SR-2 and build machines like this are going to be few, but to have the option out there is quite something. EVGA doesn’t entirely believe that this will sell best to the enthusiast market, but will rather attract those who need true workstations to get their work done, especially with design work. The SR-2 platform as a whole is the easiest way to build up a super-powerful machine, and of course overclock it. 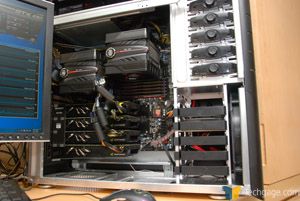 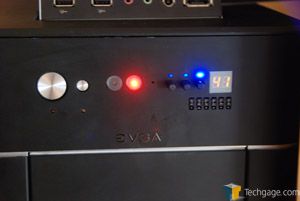 The SR-2 will become available this summer, along with the chassis. In addition, EVGA will be launching a 1200W power supply, also featuring SR-2 branding. I’m not entirely sure of all the specs of the unit, but it is nearly completely modular and is obviously designed with the SR-2 motherboard in mind, so it should be able to handle almost all the board itself is able to handle.

For the record, everything you see in the above image was draining around 1200 – 1300W at full load. Yes, that’s what I call a beast.