After I posted our news item of Fedora 15’s release, I got restless. I had to install it. It’s been a long time since I last used the distro for something other than a quick test, so I figure I’m long overdue for a return. And because I haven’t given GNOME 3.0 a single test since its release, how could I pass up killing two birds with one stone?

The last time I installed a Fedora release, there was no GUI installer, so to see one here was a nice surprise. For the most part, those experienced with Linux will have no problem with the installation process, while those not too familiar with it might spend a little more time perusing the options. If there was one minor niggle I could mention, it’d be the network configuration. Whether wireless or wired, it’s not intuitive to setup, and until you proceed to the software portion of the installer, you won’t even know if a connection is active.

On a notebook equipped with an Intel GPU, GNOME 3.0 worked brilliantly once I hit the desktop. In fact, the performance was so good, I felt like I was using a much more powerful machine. On the desktop, I ran into a couple of issues. Because the ‘nouveau’ driver doesn’t support the graphics card I have in my PC, I had no acceleration at the desktop, which resulted in a ‘failsafe’ mode – that is, one that’s themed like GNOME 3.0, but acts like GNOME 2.x. 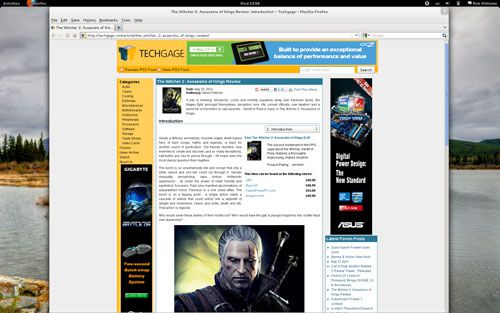 Being that I’m not too familiar with how Fedora (or its Red Hat parent) works, the solution to this problem proved to be an absolute chore. I’m not going to explain the entire process I dealt with here, but the end solution was to add a couple of alternate software repositories and then install both kmod–nvidia and the latest driver available through the software manager.

As frustrating as that problem was to deal with, it ended up being the only major issue I encountered. A minor one is that for some reason, the left and right channels for my audio are swapped, and there doesn’t seem to be a way to correct that – other than to move my speakers around, of course.

Because Fedora aims to be “free”, there is no proprietary software to be found in the repository. As a result, not all of the applications I wanted to install could be found there, but most were, such as Bluefish, Thunderbird, Xchat, VLC, FileZilla, Pidgin and Clementine. For non-free software, I installed both VMware Workstation 7 and the Adobe Flash plugin, and while VMware installed without an issue, Flash proved to be a problem. Even after the official ‘yum’ version was installed, I had no Flash in Firefox. The ultimate fix was found on Mozilla’s support site, which had me put the plugin (.so file) into the browser’s plugin folder (in this case, /usr/lib/mozilla/plugins/).After that, Flash worked just fine (as well as Flash will work, anyway). 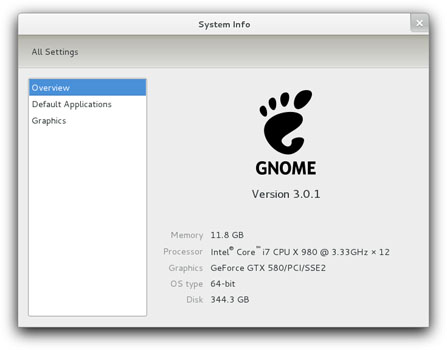 With regards to GNOME 3.0, I won’t lie… I felt like rebooting into another OS after spending just five minutes with it. In all regards, it just felt clunky and overly difficult to use, but despite that, I didn’t find myself aggravated. It’s just that there’s a learning-curve, and one that’s unavoidable – even if you were a devout GNOME 2.x user. Whereas KDE 4 felt a lot like KDE 3, GNOME 3.0 feels nothing at all like GNOME 2.x. Similar to Ubuntu’s Unity desktop, GNOME 3.0 focuses a lot on maximizing the real-estate on a monitor, and being as efficient as possible. So far, I think it does a great job.

There are a couple of things that bothered me at first, such as the lack of a minimize or maximize button, but it’s something I got used to fast. To minimize, you need to right-click the title-bar and click the option, and after doing this a couple of times, I found myself preferring it. It’s much quicker to just right-click and click the option fast than it is to drag your cursor over to the appropriate button. On a related note, I am not too fond of the large titlebars, but it’s not a deal-breaker. 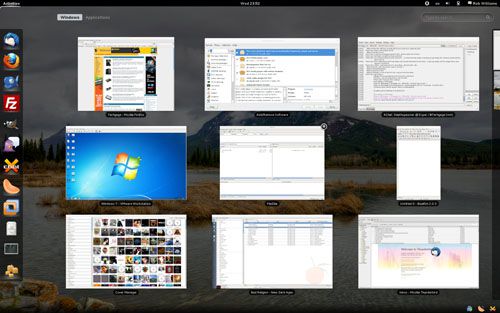 Despite the initial pains of learning the latest GNOME desktop, I admit I found myself falling in love with certain things as the first night of usage went on. Similar to Unity again, to raise the application launcher bar and also get a cascaded view of open applications, you need to move the mouse cursor to the top-left corner. From there, clicking on an application to launch or specific window to restore is simple, and elegant. In lieu of putting the system tray in the top bar as one would expect, the icons can instead be seen when looking at this overall view. For some things, this might not be ideal, but I came to like the feature a lot because of how it’s implemented and because of how it cuts down on distraction.

As I’ll be using Fedora 15 for a week or two and will be publishing an in-depth look not long after, I won’t tackle all of my likes and dislikes here. Instead, I wanted to use this post to whet your appetite, and perhaps encourage you to give the latest version of Fedora a try if you are on the fence. While not perfect, it is rather polished, and for the most part hasn’t caused me much headache so far (the NVIDIA driver is the lone exception).

I wasn’t expecting it, but GNOME 3.0 is really starting to grow on me. Could it even be possible to imagine that I might move over from KDE? We’ll see how I feel after a couple of weeks of use!