Ferrari unveiled the latest stallion to emerge from its stables: The F12 TDF (Tour de France) is a regular F12 Berlinetta upgraded with a slew of go-faster parts and wrapped up in a more aerodynamic body.

Chief among the new F12 TDF’s mechanical performance enhancers is the 6.3L V12 with both its maximum BHP and torque increased. Ferrari has upped the maximum power from the already impressive 730bhp to 769bhp, while torque figures have gone from 509lbs/ft to 520lbs/ft. Eighty percent of the engine’s torque potential is available from 2500RPM on up, while the V12 itself redlines at 8900RPM. The performance upgrades were achieved without resorting to any form of forced induction methods (supercharging/turbocharging), by the way. Instead, racing-spec tappets and variable-geometry intake trumpets are responsible for generating the peak power at 8500RPM.

Horsepower isn’t everything, though, even for a Ferrari. Allied to the extra engine output is a revised dual-clutch gearbox. Consequently, upshifts for the F12 TDF are 30% quicker, while downshifts are 40% quicker compared to the plain Jane F12 Berlinetta’s gearbox. 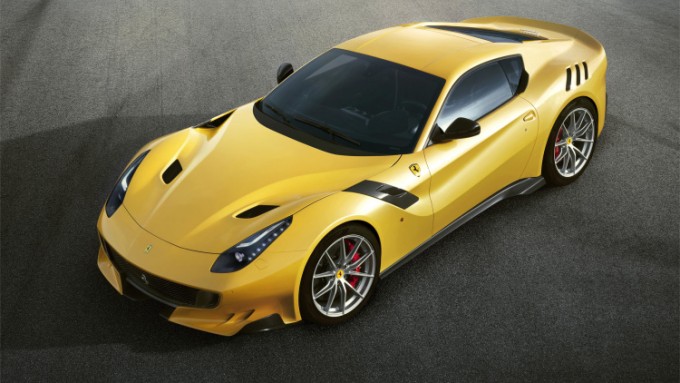 Even the front tires have been upgraded. The new F12 TDF’s are wider by 8%. This detail should help tame the anticipated under-steer generated by the uprated engine.

Speaking of improving handling, the F12 TDF also boasts massive upgrades to its aerodynamics to make sure the car’s downforce levels are up to par. Details such as a larger front splitter, dive planes and floor wings, a redesigned rear wing that is 6cm longer and 3cm taller, underbody aerodynamic detailing, and what Ferrari calls “Aerobridges” behind the front wheels all contribute to a massive 230kg of downforce while at speed. This downforce figure is nearly twice what the vanilla F12 Berlinetta is capable of.

The final ingredient in the F12 TDF which makes it superior to the standard F12 is a weight reduction of 110kg.

All of these elements make this newest Ferrari a true tour de force.