Firefox is Going 64-bit – What Should We Expect?

With a lot of the software we use on a daily basis going 64-bit, isn’t it about time that our Web browsers catch up? While it’s not of utmost importance from a performance perspective to go 64-bit (it’s just a Web browser, after all), there’s little reason not to go in that direction – especially when plugins, such as Flash and video decoders, are available in 64-bit flavors.

While 64-bit browsers seem to be non-existent on the surface, almost all of the major offerings out there are available in 64-bit if you look hard enough. Microsoft has offered a 64-bit version of Internet Explorer since version 7, and Apple has offered a Safari 64-bit client since OS X Snow Leopard’s release. And for those who look hard enough, 64-bit versions of Firefox, Chrome and Opera can all be found. 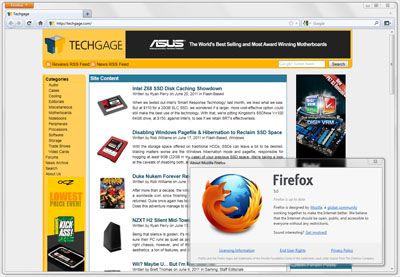 That said, no vendor has pushed its 64-bit variants to a huge degree for the sake of it leading to certain caveats that would frustrated some users. Adobe, up until its Flash 11 beta, hasn’t even offered Windows users a true 64-bit option, and the company has only just returned that option back to Linux users. With Flash in itself being installed on more than 90% of consumer Web browser installations, this has been a problem.

Linux users have been able to get around the issue thanks to the nspluginwrapper application, that tricks a 64-bit browser into thinking it’s using a 64-bit Flash plugin, but Windows users (not sure about Mac users) have had no option. Plus, that’s a clunky design any way you look at it. With the recent announcement from Adobe that a permanent 64-bit Flash plugin is en route, however, the time to begin rolling out supported 64-bit browsers is, well, “soon”.

What should we see from our 64-bit browsers? Firefox developer Asa Dotzler also wants to know, and asked the question in a blog post about a week ago. Should we see more security? Faster performance? Improved memory footprint? I think it goes without saying that all of those things would be nice. Let’s just see a 64-bit version of Firefox in general and then move ahead.

For those interested, Firefox 8 alphas are available in a 64-bit flavor for Windows users, which can be found here.