Ever since Valve released Steam for Linux, I had been hoping that Sid Meier’s Civilization V would come to the platform. In truth, I didn’t actually expect it to happen – not even after Beyond Earth was announced for Linux. As the game was announced for the OS earlier this week, though, this is one of those times I’m glad reality diverged from my beliefs.

Assuming you have access to all of the available DLC and the two expansion packs, you can expect Steam to download about 5GB, with the installation size being a bit more than that. Upon starting the game, you’ll be treated to an Aspyr logo screen first and foremost – it’s thanks to these guys that we’re able to play the game on Linux. Aspyr ports many great games to Mac OS X, so it’s my hope that Linux will be seeing a lot more love like this going-forward.

After the splash screens, the game takes about the same amount of time to load the main menu as the Windows version does – which is to say about 20 seconds. The first thing I wanted to check out was how the graphics settings differed between the versions, and not surprisingly, there are a couple of changes.

When Civilization V first came out, I heard from a developer at an AMD conference about the game’s use of DirectX 11, and the best examples given were with the leader scenes. Thus, I am assuming that “High” insists on DX11, which is why that option doesn’t even exist in the OpenGL-based Linux version.

I do admit that it’s a little unfortunate that anti-aliasing isn’t listed, but I’m guessing there’s a reason for its omission. It could be that to enable it would have required too much work; the way the game engine was ported over (despite it now being a native build) might have wiped out the chance to have AA. You may be able to force it in the graphics driver, but that’s something I haven’t tested.

Note: To flick through these images in a photo-viewer, download and extract this archive (right-click, 2.5MB ZIP).

For the sake of comparison, I started a fresh map (my old Civ V saves wouldn’t load) and took screenshots in both Linux and Windows; one is zoomed-in, and the other is zoomed-out. First, the close-up shots: 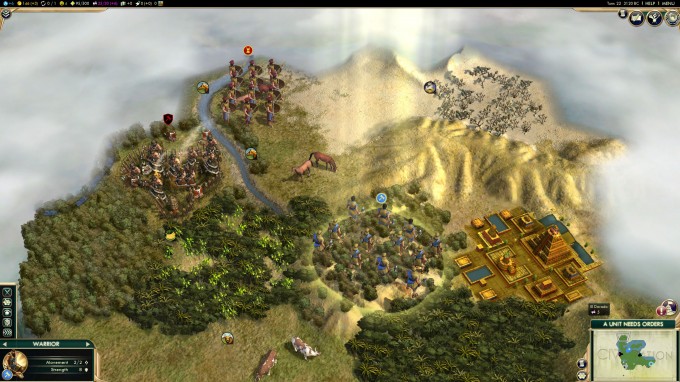 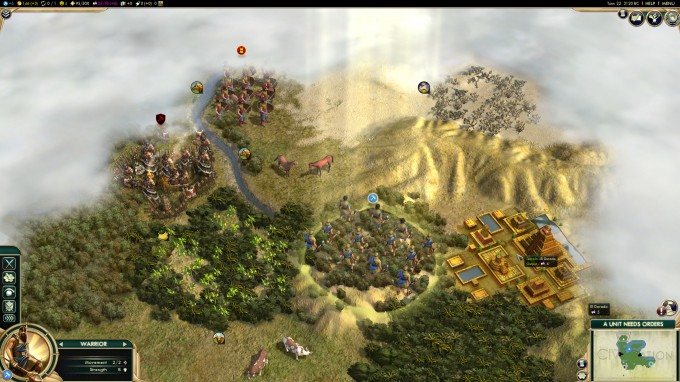 The main difference that I can see is with the clouds; in the Linux version there’s a blue tinge around their perimeter. This isn’t an issue, of course, and isn’t even something that would have likely been noticed if not for the side-by-side comparison. But that said, I do prefer the look of the clouds in Windows more. Interestingly, the clouds in the Windows version are a little more intrusive in open tiles than the Linux version is (look at the Barbarians and opponent Civ).

Also of interest is the fact that the foliage formations are not exact between versions, even though I’m using the same saved-game file. This is most noticeable above the cattle at the bottom. This again is the kind of thing you might not notice without a side-by-side comparison, and while when flicking back and forth between images, you can clearly see the difference, one doesn’t appear to be better than the other.

Before moving on, I should mention that the bottom-left menu system is much larger in Windows, although I’m not sure if that’s due to an option or some other factor. I thought I’ve seen that smaller GUI element the Linux version uses before, but after perusing old screenshots, I can’t settle on it.

Overall, I’d say that there’s very little difference in graphics when zoomed-in. I still prefer the clouds in the Windows version, but that’s about as minor an issue as one could get. So what about when we zoom out? Are differences easier seen then? In some ways, yes, and the results might surprise you: 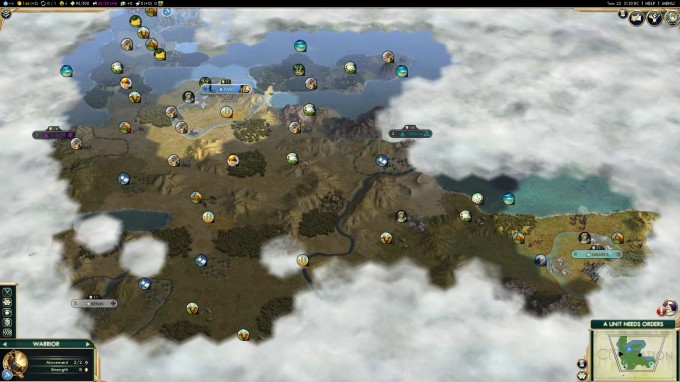 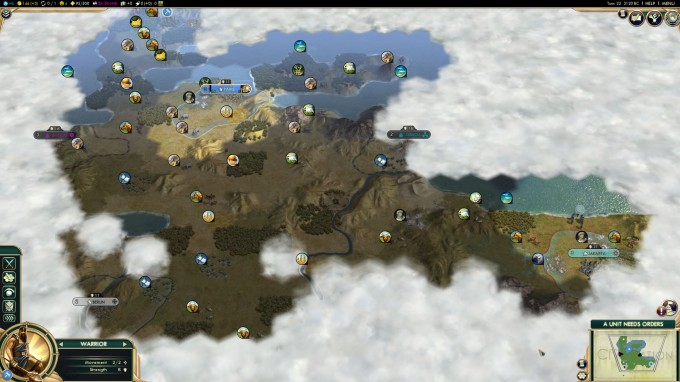 In this view, the cloud differences are much easier to spot, but that’s actually the least-important thing about this comparison. I highly recommend you download these images with the archive above and flick between them, because it’s difficult to spot the differences with the images simply side-by-side. What you’ll notice is that the landmass itself shifts around a little bit; the lake to the left of the middle is a little more defined – but smaller – in the Windows version; and in the Linux version, the mountains are actually more defined than they are in the Windows version. So too is the Barbarian camp smack-dab in the middle of the shot.

I bet you wouldn’t have imagined that the Linux version actually looks better in some cases, would you? I sure didn’t expect it. If the clouds in the Linux version looked as good as they do in the Windows version, I’d say Tux has got the best hand here.

None of this is to say that the game under Linux won’t look a bit different for somebody else. For the Linux version I ran the game under Gentoo, using the R335 driver with a GeForce 780 Ti.

In quick testing, the performance of the game was fantastic, although VSync clearly wasn’t working – despite it being enabled. Vsync was also enabled in the NVIDIA control panel, so I’m not sure what the issue was, though it’s not the first time I’ve experienced the issue under Linux (it should be noted that Portal and Half-Life 2 all use Vsync just fine under my configuration).

Overall, and despite the niggles, I can say that Aspyr has done a fantastic job in porting Civilization V over. Now all I can think about is which other titles the company might be able to port down the road – but I don’t want to get too greedy.