Many Forza Horizon 5 Players Seemingly Getting Banned For Superfluous Reasons

It’s a fact of life that if there is an online game, there are going to be bans. Sometimes, it’s obvious why someone was banned, while other times, it’s seemingly impossible to know what happened. Naturally, there are always those who try to plead ignorance about their ban even though they know exactly what triggered it, but in Forza Horizon 5, there seems to be an increasing number of people who genuinely have no idea what they were banned for.

Anyone who’s followed Forza Horizon communities in the past have undoubtedly come across posts from those who’ve been banned, and have been perplexed as to the why. It’s usually easy to write these posts off, because it’s likewise easy to hide behind a façade and pull at heart strings in hopes of seeing a ban get overturned (which doesn’t seem to ever work). As it stands right now, though, there appear to be an unusually high number of complaints revolving around banning, with more and more finding themselves genuinely baffled by what they did to deserve it.

For those who haven’t played a Forza Horizon game in the past, there are many ways you can get banned. Taking advantage of an exploit is one way; having an inappropriate username is another. Bans seem most common to liveries, however, where even you, a player who didn’t create said livery, could still get banned for using it. That’s despite the fact that the game allowed it to be listed, and perhaps even recommended it. 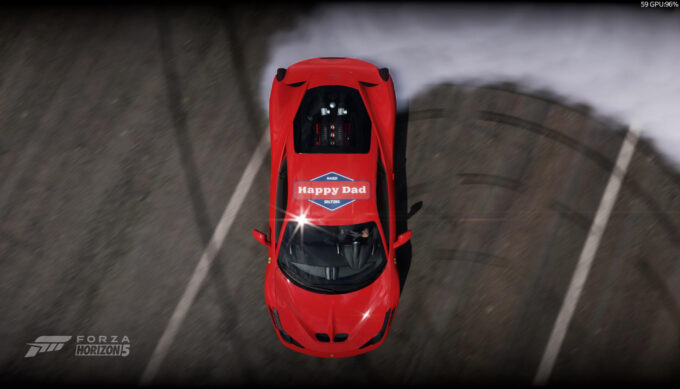 The shot above is of a livery that includes a Happy Dad hard seltzer logo. The creator, reddit user ViralHQ, believes this is what got them banned – a simple reference to alcohol. Meanwhile, liveries that involve other alcohol or cigarette brands are easy to find. A huge issue here is that many liveries that feature these brands are official, and have been seen in the real-world. For Forza to aim for the best realism possible, and then ban people for well-designed real-world liveries, is a bit nuts.

But, that is just one case. If you search either r/Forza or r/ForzaHorizon for “ban”, you’ll see many examples of players getting banned for allegedly nonsense reasons. In the past, people have been banned for having “free” in their livery, such as by putting “Free Candy” on the side of an unassuming white van. Another user got banned for a 420 livery.

Just today, another post popped-up where someone was seemingly banned for sharing anime-inspired liveries, apparently none that most people would think were offensive. The kicker? This player wasn’t just banned for seven days, but rather nearly 8,000 years. Whether or not you like anime, that seems a bit excessive.

Could this become a bannable livery in Forza Horizon 5?

The “Birds Aren’t Real” livery above is one of my personal favorites to use in FH5, and I can’t help but wonder if it’d be deemed bannable, because it revolves around a (joke) conspiracy. It’s hard to tell exactly what it is that makes those who hand out bans tick.

In one thread we looked through, someone mentioned that Playground Games removed the “SS” part of the official fourth-gen Chevrolet Monte Carlo livery, as SS can refer to the Schutzstaffel, even though its actual meaning for the auto is “Super Sport”. We had to see this for our own eyes, and sure enough, it’s true:

Whether or not this was the right move for Playground Games to make isn’t really important, but it does highlight the extent that the developer has gone to make FH5 as family-friendly as possible – something crucial given the fact that the game was certain to be played by a massive audience thanks to its Xbox Game Pass inclusion.

Nonetheless, as mentioned before, a major issue surrounding livery bans is that you don’t need to be the person who created it to be banned. If you’re unlucky enough to download a livery you think is cool, but someone else doesn’t, you yourself could be banned. You might ask, “Can’t you just reason with publisher and get unbanned?” Based on a lot of perusing of Forza communities since Forza Horizon 3‘s launch, we can say it doesn’t seem likely. Many believe they have absolutely no recourse to becoming unbanned, so many who get modest bans won’t usually even bother fighting it.

It’s unfortunate that these bans are being handed out like free candy, because the game on the whole is great – maybe aside from the cheesy dialog and currently bad online matchmaking (mostly in Horizon Arcade). Issues like the online matchmaking could be fixed, but we’re not so sure about seeing an improvement on how bans are handed out, since it’s only seemed to get worse since the previous titles.

If you want to be as ban-resistant as possible in Forza Horizon 5, you’re best to just stick to the color options the game gives you, instead of using liveries. So far, Playground Games has largely kept mum on this issue, so there’s no telling if the situation will ever get better.