Gamer Reaches Max Level in World of Warcraft Without Killing Anything

Reaching the max level in an MMO is something any gamer of the genre strives for. It might take weeks, months, or even years, but once that final “ding” occurs, it’s like magic. If you’ve ever had the pleasure of pulling off such a feat, you know that it requires a lot of determination, taking advantage of any quests that are available, and killing enough mobs to clear out the entire game world a hundred times over.

But picture this. You’ve just reached the maximum level, and throughout the journey, you didn’t complete a single quest, nor kill a single monster. Impossible? Not so, as proven by dedicated World of Warcraft player Everbloom.

Taking full advantage of the extra systems the game offers, such as awarding the player XP for trade skills and exploration, Everbloom went from 0 – 85 simply by exploring the world and doing what many other people would consider “grinding”. She managed to not go insane, however, and even went on to say that it, “really gives you a chance to see an amazing world up close and personal. I spent hours swimming around reefs and flying to the farthest reaches of the maps.“

As someone who loves to explore in well, any game I generally enjoy, I can totally understand that statement. Still, the tedium must have been a bit much at times, but how many can say they pulled off something like this? Not many, that’s how many. 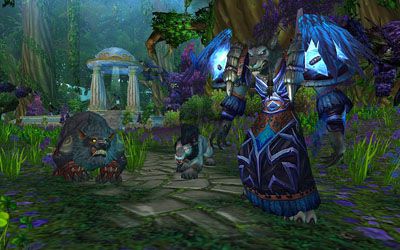 If you like to explore, and enjoy a challenge I really REALLY recommend this, I have been playing since day 1 on other characters and I even have an original Loremaster (you know, back when it was hard) and I saw so MANY new things with Everbloom that it really made it worthwhile for me to continue on with this character, and each level was a major achievement!