At PAX East, held in Boston once again, Gearbox Software managed to captivate both local and remote audiences alike with its announcement of Borderlands 3. For long-time fans of the Borderlands series, the anticipation of waiting for Gearbox co-founder and CEO Randy Pitchford to show off the trailer was nearly painful. But finally, it’s dropped:

There’s not too much to go on story-wise right now, but during his presentation, Pitchford made it clear that there would be many new and returning characters, including fan favorites Tiny Tina (who also just launched a real-world card game), and Brick, who did us the service of supplying soothing saxophone sounds in the trailer.

Based on everything seen in this quick trailer, it’s safe at this point to assume that the game is going to cater directly to fans, without being littered with caveats. BL3 looks to deliver the same crazy action fans have come to love, and not to mention “billions” of potential loot items. Many of the areas shown off look fantastic, with plenty of variety on offer. 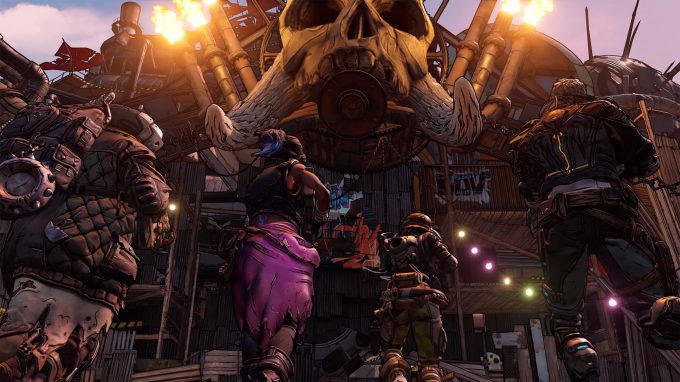 Because Gearbox knows that Borderlands fans are going to be running back to the older games to prime themselves for BL3, Gearbox is releasing the original title for Xbox One and PlayStation 4, coming to us in the form of a Game of the Year edition. Not only is this edition upgraded with 4K textures, there are new weapons, new character heads, and even gold chests. There’s also the new ability to play the game in four-player split-screen mode.

As for the other two titles, The Handsome Collection is also getting ported to the newer consoles, and will also receive a 4K texture pack on April 3. The upscaled textures will impact characters, vehicles, weapons, and environments. This patch will also open up four-player split-screen functionality for those who love local laughter and slaughter.

Those standalone releases are specific to the consoles, but it appears that the PC version of every game will be receiving the updated textures as well. On PC, The Handsome Collection isn’t a single release, but instead just a collection of all of the game’s content. So, if you already own any one of the games, you should be able to expect an update on April 3.

And speaking of, that’s also the time when we can expect to learn more about Borderlands 3, hopefully including things like release date, pricing, and platform availability.