We’ve had a lot of classic oldie-but-goodie games that have been brought back from the depths of obsolescence thanks to GOG, and many more old games that have received new love as they crossed to the open source community (Descent, Ultima VII, Sierra adventure games, Hexen).  However, true remakes of classic titles like Baldur’s Gate and Monkey Island have been a more recent invention.  When done right, these remakes breathe new life into titles that would have been lost to the ages as “amazing… back in its day.”

Gearbox Software just crossed another one of these “man I’d love to see this if it were done now” games off my list.  Space warfare fans rejoice – the battle is coming to your screen again with a complete rebuild of Relic and Sierra’s classic Homeworld and Homeworld 2. 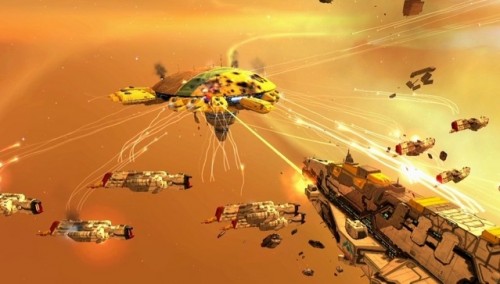 If you have never played the Homeworld series, I’ll understand – but you’re really missing out on a couple of amazing games.  Released in 1999, the first game was a revolutionary take on the Warcraft formula by implementing it in complete 3d.  Battles took place in a seemingly limitless sphere, allowing a tremendously different type of battle strategy from the limited “ground/hill/flying” Z-axis stack provided in 2d RTS games.  Other RTS elements, including resource control, unit building and a technology tree, were all beautifully implemented to take advantage of the new redefinition of terrain, which now included asteroids, dust clouds and the like.

One of the most unique things about the Homeworld series involved its single-player campaigns, which featured a persistent fleet – resources, technology and ships would carry from one battle to the next.  In the original, this amounted to a very high difficulty that punished you for frivolous Blitzkrieg-style tactics or abuses of resources, as you would be left deficient in future battles.  Relic tweaked this slightly in Homeworld 2, creating a difficulty that scaled up or down with whatever fleet you brought into the mission. 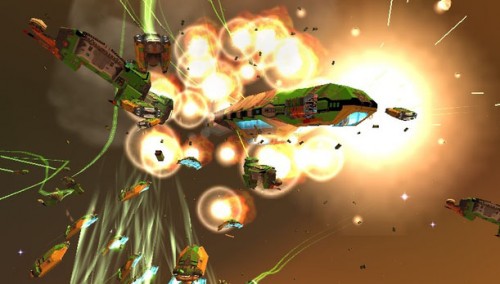 Relic was acquired by the now defunct THQ in 2004, but was kind enough to release the Homeworld source shortly before its acquisition, keeping the title alive in the open-source community with ports to multiple platforms.  THQ, however, did little with the actual franchise until its closure in 2013, as most of the Relic devs fled from the company.  The dismantling and auction of THQ’s assets allowed Gearbox Software to acquire it for $1.35 million, and it appears that it will no longer sit on the shelf collecting dust.

Gearbox promises that a complete HD rebuild of both Homeworld and its sequel will be coming soon to Windows.  The company also plans to make a more direct port of the originals to other “leading platforms,” which we can only translate to mean iOS and possibly Android devices (as they would have the resolution and computing power to make good use of the original’s graphics).

No target date was mentioned in the announcement, which came out of Pax Australia at the end of last week.  However, we’ll be keeping an eye out for more info as it becomes available.