At GeIL’s booth, the company didn’t have a whole lot to show off, but what was easily the most interesting was a wall chock-full of their Black Dragon RAM, all seemingly being stressed. They were showing off what they call DBT, or Die-hard Burn-in Technology, a proprietary setup that allows them to put modules under accelerated stress, to make sure that the customer won’t end up with a faulty product.

The DBT is run in a warm room of about 60°C, and regular kits are stressed for at least three hours, at their “stock” settings, whatever they may be. If after three hours the kits haven’t died, they pass the test and are packaged then shipped out. The company said that since they implemented DBT, RMA rates have dropped from 0.5% to 0.1%. Seems small, but given the number of modules the company ships, that saves a lot of money in the long-run.

Also of interest was the company’s Cyclone memory cooler. Unlike most RAM coolers which look boring and  simply stack two or three fans on top of the memory, the Cyclone features a unique design that the company promises is far more efficient than other solutions on the market. 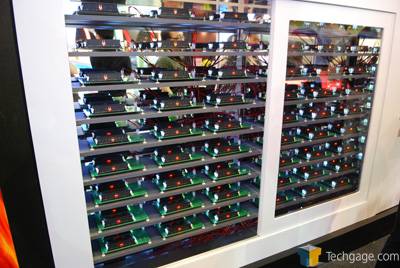 Ideally, the Cyclone should be paired up with heatspreader-equipped RAM, and once installed, the heat will run up to the cooler and dissipate quickly through the numerous fins. This cooler also features only a single fan, and we are promised that it’s near-silent (it was impossible to tell on the show floor). As an added bonus, the fan also features LED text as it spins around, giving you information on your temps and rotational speed. You can also add your own text if you like. The Cyclone is available now, and retails for around $30.