Intel’s “Sandy Bridge” processors are right around the corner (rumor is ~2 months), and as you might expect, motherboard vendors are hard at work to make sure their product is available at the same time. GIGABYTE, likely in response to a product briefing that ASUS is holding in San Jose next week, jumped the gun a little bit by giving us lots of information about its P67 launch boards.

Of the boards the company mentioned, the P67A-UD3R, pictured below, is going to be the initial flagship, and if there’s one thing you might immediately notice, it’s that, well… it doesn’t feature a hundred different colors. In fact, it’s completely dominated by black, and it looks awesome. EVGA has been a relative leader in black-PCB motherboards for some time, and it’s great to see GIGABYTE adopting it as well. Enthusiast boards should look like enthusiast boards, in my opinion.

As we plan to respect Intel’s NDA, we’re not going to talk about the chipsets themselves here, but rather just the boards and non-related features. The P67A-UD3R as mentioned is matte black in color, and is set to include full USB 3.0 and SATA 3.0 support, as we’d all hope. Like GIGABYTE’s current higher-end boards, this one will feature the Ultra Durable 3 design, including 2x copper inside of the PCB.

In addition, the board will include the 3x USB Power we’ve become used to (more oopmh to USB devices plugged in, which means faster cell phone charging, for example), and also DualBIOS, which essentially rids the possibility of a corrupt BIOS from ruining your day. Like current P55 motherboards, this one includes support for up to 8GB of memory, and two PCI Express x16 slots (degraded bandwidth when using dual-GPU, naturally).

Alongside the P67A-UD3R, GIGABYTE also plans to launch the P67A-UD3, which is almost the same board, but is targeting the more mainstream crowd. The other is the H67MA-UD2H, and as the name suggests, it features an mATX form-factor, but still supports much of what the above boards do, including dual-GPU.

Intel’s launch is a ways off, but it sure looks like GIGABYTE is prepared for it. More pictures can be found in the comment thread. 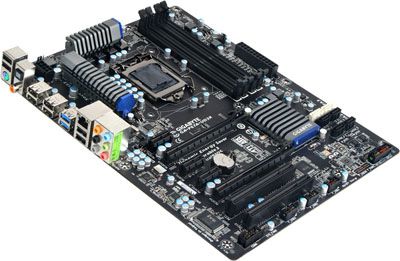