Most PC enthusiasts will at some point have to hit up their system’s BIOS, but I’m sure I’m not alone in thinking that sometimes, it’d just be more convenient to change a setting inside of Windows to save the hassle of a reboot. Catering to that idea, and to also give said enthusiasts something to “touch”, GIGABYTE will soon release its appropriately called, “TouchBIOS”.

Not to be confused with EFI, TouchBIOS is a piece of Windows software that offers quick access to many BIOS functions, such as overclocking, drive priorities, password, security, and so forth. Unlike a standard overclocking tool, TouchBIOS is meant to be used full-screen, and feel like you’re actually using a BIOS – albeit a colorful one.

As the name suggests, TouchBIOS is designed to work well with touch displays, a fact made obvious by the large buttons and scrollbars, and also large fonts. Anyone who owns a smart phone knows that it can be a little difficult to be precise with your finger, so with a large interface like this, manipulating the options shouldn’t be too much of a hassle. 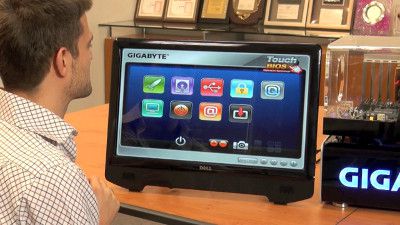 While neat on the surface, TouchBIOS does seem to have a couple of issues. The lack of text on the main screen is one, where some of the options will just have to be guessed at. The other problem is… who wants something like this? A BIOS is a finicky beast, and generally, UIs are not as easy to use. The EFI used on recent ASUS boards still act as a regular BIOS, so navigation and tweaking is simple, but I’m not sure the same could be said about the TouchBIOS.

The main problem, of course, is that it doesn’t look like GIGABYTE’s Z68 line-up will include a proper EFI solution, and though “Hybrid EFI” is a term being thrown around, a board either has EFI or it doesn’t. Hybrid EFI would simply mean that the board uses a regular BIOS, but has a feature such as TouchBIOS to emulate what could potentially be possible with EFI.

What do you guys think? Would you use software like TouchBIOS, or rather see a proper EFI solution? Or neither?