Yesterday, I posted about a new high-end motherboard that eVGA were showing off, but aside from them, it was only Gigabyte who was actually pushing the kind of hardware that we were personally looking for. Motherboards, and lots of them. In particular, they had a keen interest in showing off their latest AMD-based boards, to coincide with the launch of Phenom II.

To help prove how much gusto their boards have, they and a few other co-sponsors held an overclocking event during CES to showcase their overclocking-ability. On-hand were members of the Xtremesystems.org forum, including site-owner Fugger. Their goal was to push the Phenom II X4 940 as far as humanly possible, with their ultimate goal being 7.0GHz.

In the end, they were unable to hit that clock, but they still hit an unbelievable 6.8GHz, which for a 3.0GHz processor, is a 225% overclock. Just how stable was it? Well, you can pretty much guess that one, but it was stable enough to pass through a few benchmarks with relative ease. Although Intel CPUs were also being overclocked, all the focus was on AMD’s latest product. 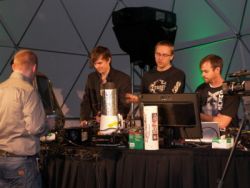 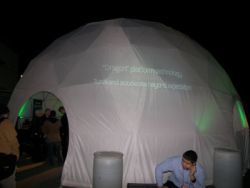 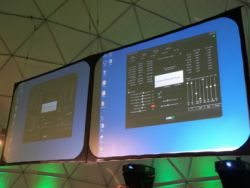 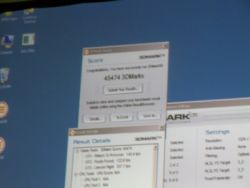 To help with those overclocks, the board used was Gigabyte’s MA79GX-DS4H, but the company also took advantage of releasing the successor at the show, the MA790GP-DS4H. We have just received the latter, and I look forward to taking a hard look at it with our Phenom II X4 940. Given I don’t have liquid nitrogen hanging around the lab, I don’t expect any 6.8GHz overclocks, but anywhere in the 4.0GHz region would make me more than happy.

Aside from the overclocking event, Gigabyte was showing off even more motherboards in their Venetian suite, including two new X58 motherboards that cater to those who want Core i7, but want to spend as little as possible. Both the EX58-UD4P and EX58-UD3R boards are going to be priced at around $200, which is much lower than most of the competition. The closest competitor is MSI with their X58 Platinum, which is a board we’ll actually be taking a look at shortly. 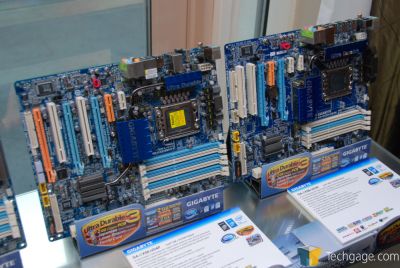 Despite carrying its “budget” price ($200 is still not cheap, but it’s a lot better than most), the new boards both feature Gigabyte’s Ultra Durable 3 features, and from the looks of things, they’re not lacking much. The UD4P board features a 12+2+2 power phase solution, on-board TPM and many other features, while the UD3R will be scaled down a little bit. It will lack the capability for SLI, and chances are it will retail for a bit less than the UD4P board. We’re looking to get one of these boards in soon, so stay tuned for our in-depth analysis.