During our meeting with Gigabyte at Computex, the company brought up their brand-new “Silent Cell” cooling technology which aims to beat out any other passive GPU cooler on the market. Pretty bold claims, but given that the company asked me if I’d be interested in doing a comparison in our labs, I’d have to say they are taking them pretty seriously.

Silent Cell is the company’s latest technology for passive cooling. The first such technology was released in 2004 and was named Silent-Pipe. That was followed-up with Silent-Pipe II in 2005, Silent-Pipe 3 in 2007 and Multi-Core Cooling in 2008. With GPUs hotter than ever, it makes sense that the company would only continue to innovate in this area.

Silent Cell is comprised of a few key features. First is the fact that the base is huge, or “ultra-huge” as Gigabyte tells it, and covers 602% more surface area than typical coolers. I have no idea what their basis for comparison is, however. Judging by the picture below, they’re comparing a mid-range GPU to a high-end, which is a bit misleading. 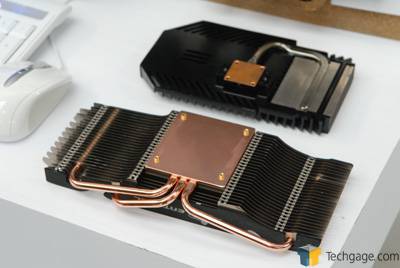 Added to that, there’s “ultra-thin” layered fins which are poised to dissipate heat far more efficiently than thicker fins, aluminum nodes and of course, three copper heatpipes. Because of this design, the cooler is supposed to spread out the heat far better than typical passive coolers, which tend to have one really noticeable hot-spot. We’ll have to get in one of their new coolers and a competitors to see just how efficient it really is.