Earlier this week, we posted about Intel’s upcoming ultra-low voltage mobile processors, which boast some incredible claims. Imagine having a 10″ – 13″ notebook that lasts up to eight hours on a single charge while still retaining reasonable performance to get work done. That’s essentially what Intel is expecting to deliver once products hit the market.

There are a few reason reasons this can be accomplished. First is the fact that these ULV CPUs are not Dual-Core, but rather single (Core 2 Solo). The second reason is the lower voltage, as the name suggests. Third, the overall CPU frequency is also low, and in the case of some of them, even lower than Intel’s own budget Atom processor (though the two can’t be compared).

During my travels, I noticed a few ULV notebooks sitting about at MSI’s booth, so I stopped to give one a quick test drive. I didn’t note the notebook model, but I’d guess it to be a 13″ offering, with the equipped CPU being the Core 2 Solo U3500, a 1.4GHz offering. In the brief time I spent with the notebook, I have to say it felt quite speedy, much more so than I expected. It will take a lot more in-house testing before I can conclude on that, though. 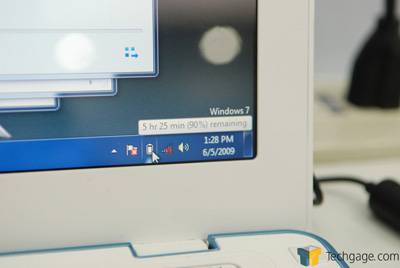 Oddly enough, the notebook I was using didn’t have its power cord blocked (it did have the USB ports blocked), so I was able to give it some quick testing. I loaded up a few applications (Calculator, Solitaire, Chess, Windows Media Player, Internet Explorer, Notepad and Remote Desktop), unplugged the machine and walked away for about 20 minutes.

During that 20 minutes, the notebook wasn’t touched, and none of the applications were actually used. As for the WiFi, although the adapter was active, it wasn’t connected to a network. With all said and done, you can see that with 90% of the battery left, Windows estimated it to be another 5h 25m.

While not quite the 8 hours I was hoping for, there’s a few things to bear in mind. First is the fact that each configuration is going to be different, and tweaked differently. Then there’s the fact that the WiFi adapter was active, and not disabled, and also the that I had multiple applications open hogging the memory. With what I saw here, I’d be very willing to believe that under light loads, this notebook could last 8 hours.

Still, for a typical scenario where one works while on the go, 8 hours doesn’t look too likely. The upside is the fact that if these notebooks are as affordable as Intel claims, then being able to pick up a 13″ notebook that lasts six hours on a single charge is simply amazing. The 12″ HP dv2 I just picked up that lasts three hours is looking a wee bit outdated.