It’s not uncommon for large companies like Google, Yahoo! or Microsoft to shut down certain services that are not delivering the return-of-investment that they require, but never does such a closure affect me directly. But with the forth-coming closure of Google Reader, I can no longer claim that.

While still a popular option for many, Reader has seen declined usage, and with Google’s other products, such as G+ and Currents, it’s no doubt become redundant from a business standpoint. Still, it’s unfortunate for those who liked Reader due to its simplicity and speed – two key reasons I’ve stuck with it for so long even after testing a variety of other options. 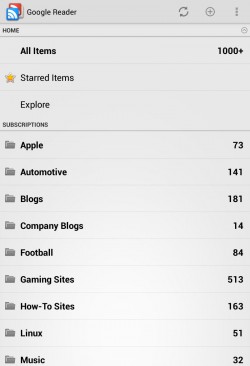 For those using Reader who would like to download all of their data, it can be done through Google Takeout. If all you want is to export your feed, you can do that from within Google Reader’s settings page.

With this closure, many competitors have been welcoming soon-to-be-former Google Reader fans with open arms. A super-popular option being thrown around is Feedly, an option I’m seriously considering as it has the ability to sync between devices (many popular Web-based RSS readers don’t support Android).

If you’re a Google Reader user, where do you think you’ll wind up?