Google to Release Their Own Web Browser?

Search engine domination? Check. Web statistics software domination? Check. Free e-mail service domination? Check. Ok ok, without going any further, you are probably already aware that I’m talking about Google. But given that Google does publish a wide variety of applications and hosts even more web services, does it make sense for them to ever stop? Not likely, and the next project that’s apparently well along in development is the long-rumored web browser.

One might immediately ask, “Why?”, and that’s a great question. Google seems to be trying something new though, instead of just reinventing the wheel. Judging by the ‘screenshots’, they want to take the simplistic approach, by making the browser lightweight but powerful at the same time. One interesting alteration to how we do things today is with the tabs, which are located above the address bar, rather than under. I’m not sure how useful that is, but they are at least trying something different.

Other neat features include a privacy mode (no personal history is saved), auto-updating of a database with malicious websites, a speedial a la Opera and even an updated JavaScript VM called V8. Why Google doesn’t just continue along with creating plugins for other browsers is likely a moot point, since that development will likely never end. Google ‘Chrome’ seems to be just another offering in the fray, and with as much R&D and technical know-how that Google has, it might just become some real competition down the road. 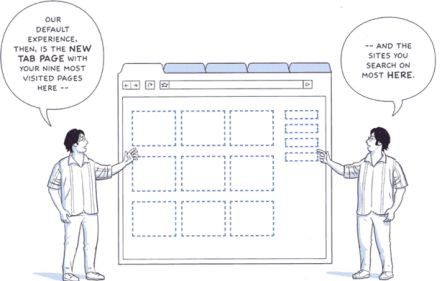 But Philipp Lenssen at Google Blogoscoped has posted a comic book which he says comes straight from Google which seems to indicate that the search engine giant will indeed release a browser soon. Reportedly called Google Chrome, the browser will be based on the open source Webkit rendering engine. So what would Google Chrome have that you can’t find in other web browsers?