How Much Did AOL Spend on CDs in the 90s?

As we head even further into our digital age, it seems that optical media is soon to become a thing of the past. If and when it does go the way of the dodo, how are we bound to remember it 10, 20 or 30 years down the road? For many Americans, the first thought to come to mind might contain three simple letters, “A”, “O” and “L”, and for good reason.

During the 90s, most of the CDs a lot of people brought into their house had those letters branded on, and after people popped them into the drive, they could’ve found themselves online. Yes, these discs arrived in the mailboxes of Americans en masse, and in the case of a TechCrunch writer, it could get as bad as having received one every day.

As far as marketing goes, this tactic could be considered brute force, because even if you didn’t care about the Internet (!), you sure as heck heard of America Online and probably also its promise of giving you hundreds of free hours to play with. This of course all happened at the time when dial-up was king, and so was the scheme of charging people per the hour, rather than by the month.

How much did all this cost AOL? According to former AOL CEO Steve Case, “a lot”, and more specifically, it could have cost much more than $300 million. But did it pay off? Absolutely. According to the article, AOL routinely spent 10% of its revenue on marketing, so it goes without saying that it was indeed successful. Who would have known? Spam works! 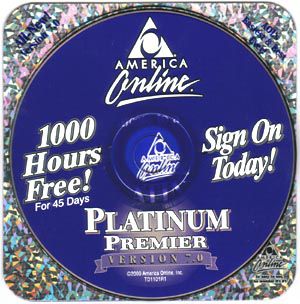 Case says that he doesn’t remember the total amount spent on the discs specifically, but says that in the early 1990s, AOL’s goal was to spend 10 percent of lifetime revenue to get a new subscriber. He says that since the average subscriber life was around 25 months, revenue was about $350 off of each of these users. So he guesses they probably spent about $35 per user on things such as these discs.