It’s impossible to say at this point (without speculating wildly and groundlessly) who or what is to blame for the content providers’ decision to end Hulu service via Boxee. Still, it’s difficult to overlook the fact that the two technologies complemented each other in such a way as to create a compelling alternative to broadcast television, whether OTA, cable, or satellite-based — a fact that’s caught the attention of cable and satellite providers. The move is likely to be a bigger setback for Hulu than for Boxee, which continues to provide content from a number of cable channels like CNN and Comedy Central.

Boxee is currently limited to Apple hardware and PC hardware running Linux, but the company announced at this year’s CES that they hadn’t turned a deaf ear to the deluge of requests for a Windows-based client. Their ace in the hole, however, is likely the easily-hackable Apple TV, which many enterprising gadget-freaks have turned into a standalone Boxee player, much like Netflix’s Roku streaming box. It’s clear that the goal in preventing Hulu from streaming via Boxee is to prevent the type of presentation that Boxee affords, which allows easy enjoyment on large screens.

It’s difficult to see how Hulu comes out on top in this, but it’s easy to see how the content providers benefit — by keeping Hulu’s streaming content on the desktop and off the big screen, they satisfy cable and satellite providers, as well as the hundreds of over-the-air broadcast affiliates, while keeping you tuned-in to distribution methods that might have a difficult time competing with the flexibility of Hulu and Boxee. 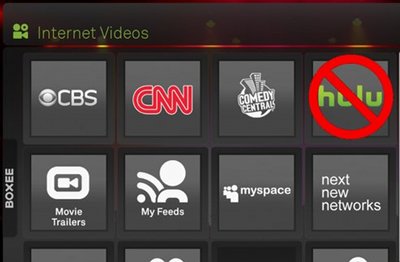 The maddening part of writing this blog entry is that we realize that there is no immediate win here for users. Please know that we take very seriously our role of representing users such that we are able to provide more and more content in more and more ways over time. We embrace this activity in ways that respect content owners’ — and even the entire industry’s — challenges to create great content that users love. Yes, it’s a complex matter. A tough mission, and a never-ending one, but one we are passionately committed to.