The term “commercial Linux distribution” might sound a little odd at first, given that Linux is well-known for being a completely free operating system, but I do feel that in some cases, a commercial offering can be a good thing. In fact, it was a commercial distribution that helped me find my way to Linux in the first place, when I picked up Caldera OpenLinux 2.4 sometime in 2000.

Back then, I purchased a boxed copy of Linux for a reason. I appreciated the the fact that I received a manual (or in the case of Caldera, I think it was a book), and also premium support, should it have been needed. Today though, certain Linux distros are so evolved, that in most cases, free versions are superior to any commercial product. Take Ubuntu for example. It’s free, but its community is huge, so if you ever run into an issue, you are sure to receive an answer to your question fairly quickly.

I digress though, because this post isn’t about a solid commercial product, but rather a lackluster one. “iMagic OS” is a distro based on Ubuntu, that is customized in such a way to become more at-home with those who are either familiar with OS X, or Windows. Sadly, this is not difficult to pull off, since the distro appears to use a slightly customized version of KDE for Windows’ users, and GNOME with a dock for OS X users.

Another issue is the price, of $80 for the Pro version, which is truly ridiculous given it’s not even a boxed product. The second issue comes when you add something to your cart. Once you do that, you have to promise them that you’ll install the OS on no more than three computers. Seriously? How about someone downloads Ubuntu instead and installs it on as many PCs as they like? I’m keen on that idea, personally.

For the most part, this distro is the result of taking Ubuntu and customizing it… something that many, many people have done before (which is why there seem to be a hundred variants of Ubuntu available). The biggest features of iMagic seem to be features that are available on any other distro, and though the developers claim to include proprietary software, like “magicOffice”, it appears from the screenshots that it’s simply a customized version of OpenOffice. I could be wrong though, but after looking through the site, I’m doubtful.

The moral of the story? Don’t fall for cheap commercial Linux offerings. If you want to go the retail route, look for OpenSUSE or even Ubuntu. At least there, you’ll see premium support, nice packaging, and an OS that’s known to be rock-stable. 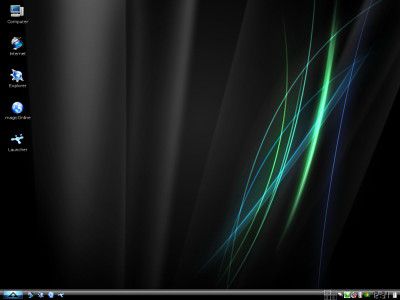 It has a license agreement that will make you blush. Not once but twice, it mentions explicitly that you are can only install iMagic OS in no more than 3 computers. You have to agree in these terms (here & here) in order to purchase this OS. According to its Wikipedia entry, “It features a registration system that when violated, prevents installation of the OS, as well as new software and withdraws updates and support.”