Installing Gentoo on a Notebook in 2011

The first time I installed Gentoo, back in late 2004, I used an at-the-time brand-new Dell Inspiron (5150 if I recall) notebook as the victim. At that time, Gentoo was a new world to me, and a confusing one. It took me about a half-week’s worth of actual work to get it installed, but it happened, and it was one of the most satisfying experiences I’ve ever had with a PC.

There was a problem, though. As Gentoo is hugely a do-it-yourself Linux distribution, there are many things that are just not done for you without your explicit consent. Things have become a little easier over the years, especially with the very informative guides and major improvements made to Gentoo’s own software, but even today it’s still an amazing challenge to get it installed onto a PC and configured correctly (the latter being the more difficult part).

At that time in 2004, the biggest issue I had was getting the wireless NIC to function, and though I did manage it after a couple of days, the solution I had been using was clunky and I was essentially limited to a single SSID to connect to. Despite Gentoo being my preferred distro and one I’ve been using full-time for 5 years (as of this week), the fact that I had such difficulty getting the wireless to work in the earlier days prevented me from ever using it on the notebook much after that first install. Since then, I’ve just used whatever distro I felt like testing out, such as Ubuntu or openSUSE.

Well, a couple of weeks ago I upgraded the hard drive in my notebook since the previous one in there was dying, and for some reason I got hit with the idea to install Gentoo again and see how things have improved – namely, to see if I’d still have a difficult time getting the wireless working. Well, suffice to say, it is a lot easier today, and within one day I had a fully functioning Linux 3.0 / KDE 4.7 install: 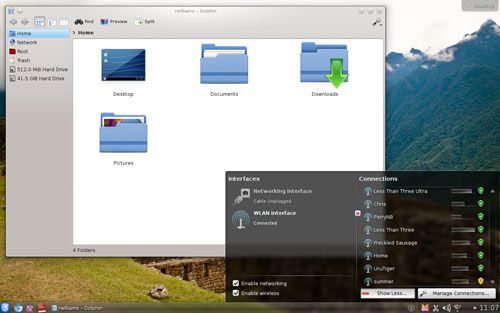 For those who might find this through a search engine or are hoping to install Gentoo on a notebook, the most difficult part of getting the wireless to work is making sure the proper driver is installed into the kernel, and then making sure to install ‘NetworkManager’ (and KNetworkManager for KDE users), and having it start at boot. It took me a while to clue into this, about an hour. I had the driver installed, and could see some wireless hotspots through the command-line, but couldn’t use a GUI to connect. NetworkManager solved that problem (rc-update add NetworkManager default).

For Intel users, a ‘ucode’ must also be installed (eg: ’emerge net-wireless/iwl5000-ucode’) that’s designed for the wireless card in the machine. This is the firmware that’s required for the kernel driver to function. Once all of these things are in place, using wireless should be no problem. If I plug in a wired connection now, it takes over, and once I unplug it, the wireless becomes default again. Suffice to say, it’s a lot easier to have wireless working as it should under Gentoo than it used to be.

Sometimes people ask me why I enjoy using Gentoo so much when it can, at times, be complicated, and the reason boils down to total control. As a DIY distro, you have full control over what gets installed (even having the ability to exclude certain functionality from software, decreasing the total number of packages installed), and that’s a nice benefit.

Because of this level of customization, I am not running any significant kernel driver that is not required by my notebook, as opposed to using a distro like Ubuntu where there will be often a large list of drivers loaded that are not required. If you take care in how you design your build, you can get impressive light-weightedness, even when running a robust setup.

Take a full-blown KDE 4.7 install with Xchat open that’s using only 365MB of RAM as an example: 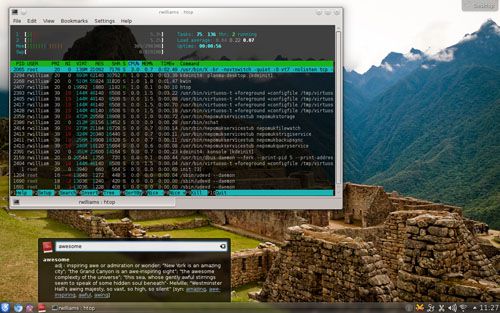 Aside from the wireless issue, another reason I never wanted to use Gentoo on a laptop is because A) software must be compiled (but that’s automatic) and B) it can be difficult to update at times. I can honestly say though, that with more recent updates made to Gentoo’s software repository, Portage, updating and getting bleeding-edge software installed is easier than ever (especially thanks to the introduction of an autounmask-write command).

With this install working as well as it is, I am glad I decided to give Gentoo another shot on a notebook, and I can’t see me moving off it anytime soon.