As part of its 50-year anniversary, Intel announced a limited edition run of a special CPU called the i7-8086K. This is named after Intel’s most iconic CPU, the 8086, and is the building block for the architecture that we now know as x86. The release is somewhat surprising, as initial speculation put up more as a joke, but Intel appears to have played ball with the idea and made it official.

The i7-8086K is mostly a binned i7-8700K, but has been tweaked to achieve something that’s keeping with the 50 year anniversary, and that’s a 5GHz turbo. The i7-8086K is effectively a pre-overclocked chip, boosting base and turbo clocks up by about 300MHz, this rather modest clock is most likely to keep the chip within the 95W TDP target, but no confirmation as yet. 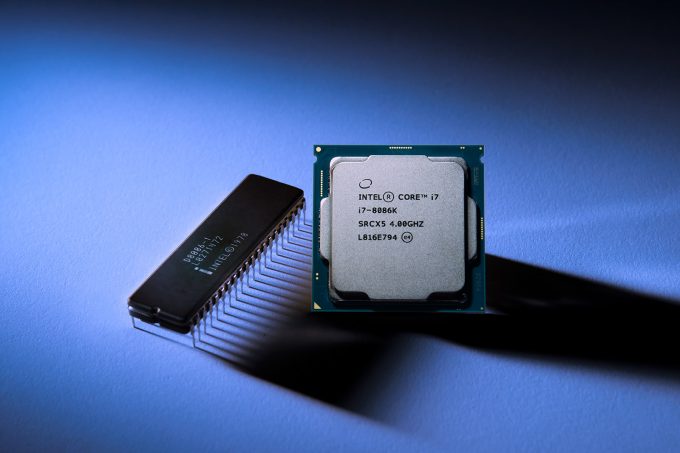 There will be a limited run of 50,000 chips, so these are likely to sell out fast, although it’s most likely these will be mostly sold to system integrators for special run machines, as there is no real official pricing or availability specified. However, 8,086 of this chips have been set aside for a sweepstakes that will open up to the public in two days, so be sure to keep an eye on it when it goes live. 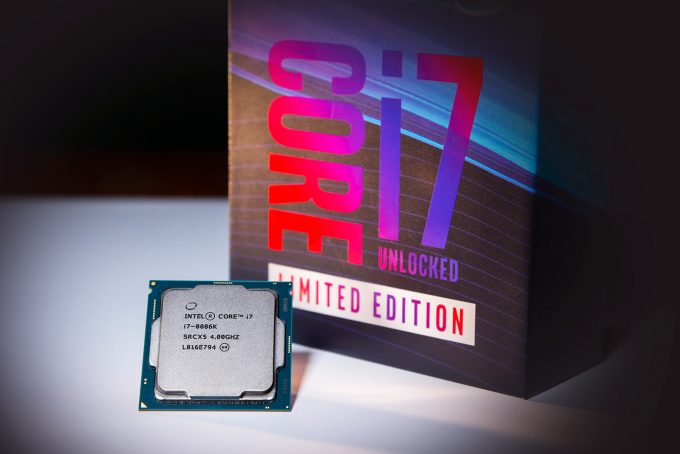 In other, more extreme news, Intel showed off a bit of beast at its Computex 2018 keynote – a 28-core CPU running at 5GHz, achieving a very impressive score of 7334 in Cinebench R15. To clarify, this was all 28 cores, 56 threads, running at 5GHz. To put this into perspective, the highest core count Skylake-X chip was the i9-7980XE, with its mere 18 cores, so a 28-core chip is surprising… until you take Xeons into account. 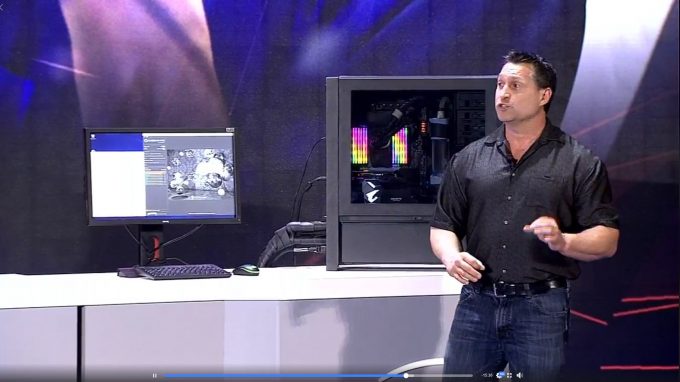 All we have to go on, is what’s been laid out already, 28 cores at 5GHz, but we do have some still shots from the live stream of the keynote (around the 55 minute mark), and if you look at the systems Intel was showing off, there are a couple of things you can gleam. First is that you can see 12 sticks of RAM, which is a good indication of 6-channel memory, which is what the Xeon Platinum 8180 is. Since LGA2066 doesn’t support 6 channel memory, there’s a good chance this 28-core chip will use LGA3647, the server-based board. This is further reinforced by what looks like an ASUS ROG Dominus motherboard – so yes, we think this is a binned/tuned 8180 server chip. 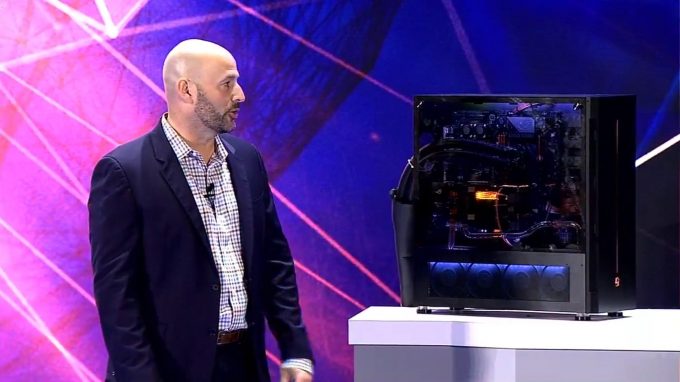 It’s the cooling that caught our attention, though. While the systems looked watercooled, it was quite clear they had been seriously modified, and in fact, the radiator looked like it was only hooked up to the graphics card. The CPU itself had two very large pipes coming off it that went under the desk, so we don’t know for certain the size of the cooling solution, but it’s most likely as extreme as the chip is. It’s either large diameter tubing for an industrial water pump, or it could even by a phase-change cooler (although there was no condensation that was visible).

While it’s fun to speculate about what this chip could actually be, we’re fairly certain it’s a server-based Xeon 8180, and will require some very extreme cooling to reach the 5GHz Intel showed at the event – beyond that, all we know is a Q4 launch. And the price? Well, that we’ll have to wait and see as well. 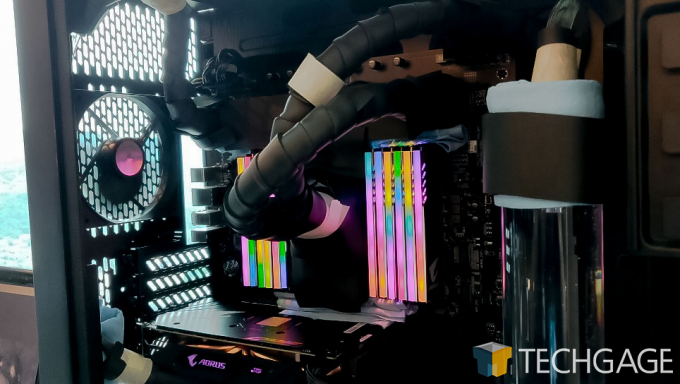 Update: A few hours after the event, we managed to get a closer look at the rig, as well as the motherboards in question. There were two systems, one is the ASUS ROG Dominus, the other is a prototype board from GIGABYTE. And our speculation on the cooling solution was confirmed, it’s not normal water cooling, but a phase-change chiller that’s typically used to cool large aquariums. So it’s a hybrid cooler (water+refrigerant). 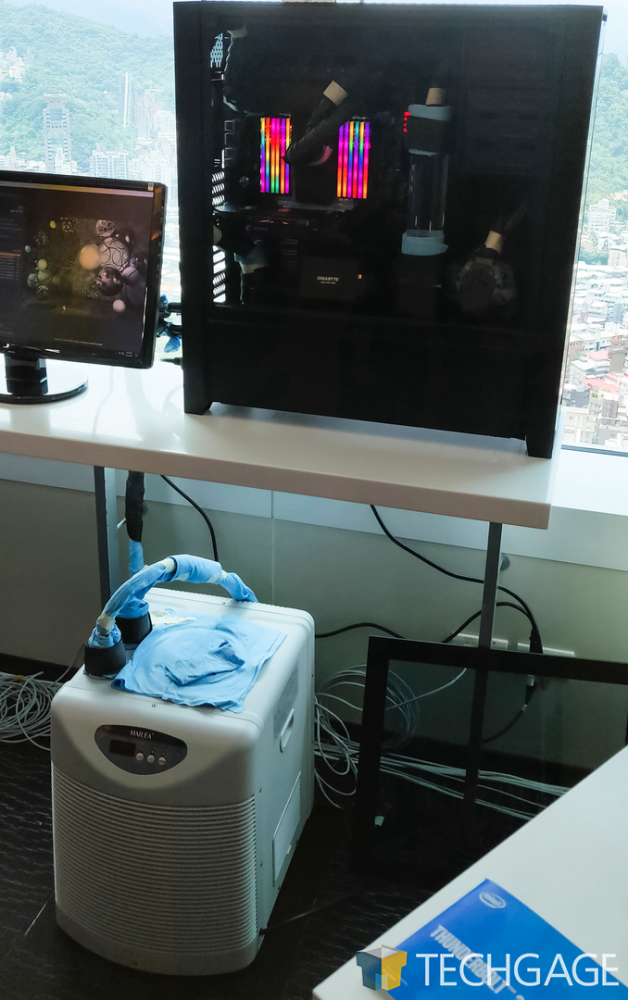 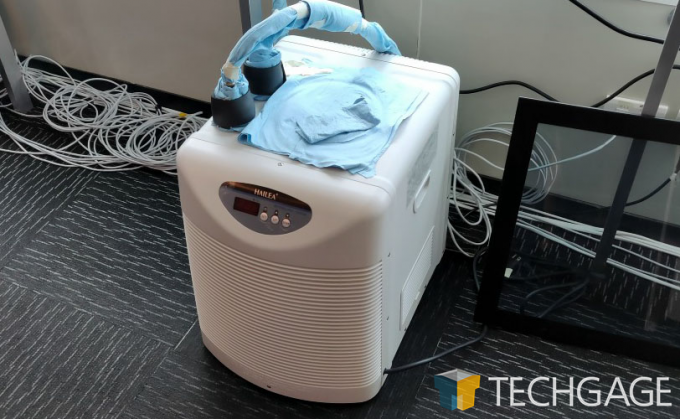