In 1971, the 4004 cost $60. Adjusted for inflation, that would put the chip at around $400 USD in 2021 dollars – not entirely dissimilar to the prices we see for Intel’s current-gen flagship desktop processors. While we’re not sure of the exact transistor counts of Intel’s latest-gen processors (the company seems to keep this under wraps nowadays), it’s measured in billions, which really highlights just how far we’ve come in process and architecture technology. In the grand scheme, 50 years isn’t that long, yet we’ve come an unbelievably long way in tech since 4004’s launch.

Here’s that classic chip in all of its glory: 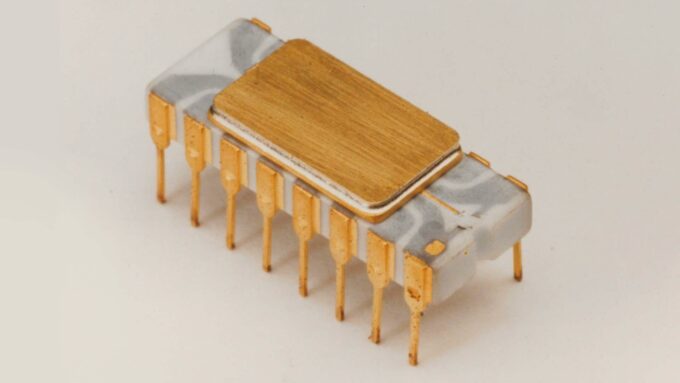 It’s easy to understate just how important the 4004 is to modern computing. In a piece on Intel’s newsroom, Intel historian Elizabeth Jones highlights the humor behind the phrase “You won’t always have a calculator in your pocket, work it out.” Today, we have smartphones in our pockets that can act as a calculator and so much more. Anyone who witnessed the launch of the 4004 in 1971 would have had their minds blown if they knew what was to come. Even if they were to correctly guess, others may have told them to stop watching so much science fiction programming.

Here’s a fun infographic for those who want a top-level view of the differences between the 4004 and a modern Intel Core CPU:

This 50th anniversary celebration comes hot on the heels of the launch of Intel’s latest “Alder Lake” 12th-gen Core processors, which proves apt, as both the launch of the 4004 and 12th-gen have impressed in their own way. We’re still in the process of wrapping up benchmarking on the 12th-gen processors we have, but will have our look posted later this week – and for a sneak peek, we can say we’re really quite impressed with what we’re seeing across our many creative workloads.

However you celebrate, raise one up for the 4004! We owe a lot today to this historic chip.