Intel’s Compute Stick is a noble concept, a personal computer the size of a thumb-drive, with all the benefits of an x86 processor. Many thumb-drive computers have emerged and failed over the years, largely because of poor software support, too limiting hardware, or the price was never right. It’s a very hard market to crack, especially since smartphones are very capable devices, complete with their own display and touch interface.

There is still interest in the Compute Stick, all it needed was a few problems ironed out to do with its wireless performance (a fairly essential component for something with such limited connectivity). The latest update from Intel brings said improvement, plus a choice of CPUs, ranging from a rather low-end Cherry Trail Atom CPU, a Core m3-6Y30, and up to a Core M5-6Y57 which also happens to include Intel’s vPro feature set (enterprise features including encryption, advanced networking and the like).

The top-line CPU is 1.1GHz, with a turbo to 2.8GHz (purely going by Intel’s spec sheet) but is also a 2-core 4-thread design with 4MB of cache. How much of this is cut back to fit into such a small form-factor, we don’t know; however, it does have a TDP of just 4.5 Watts that can scale to 7 Watts. Testing with an old Broadwell CPU that was rated to 15 Watts showed a good amount of performance for such low power, so we expect to see some good numbers from this little CPU. 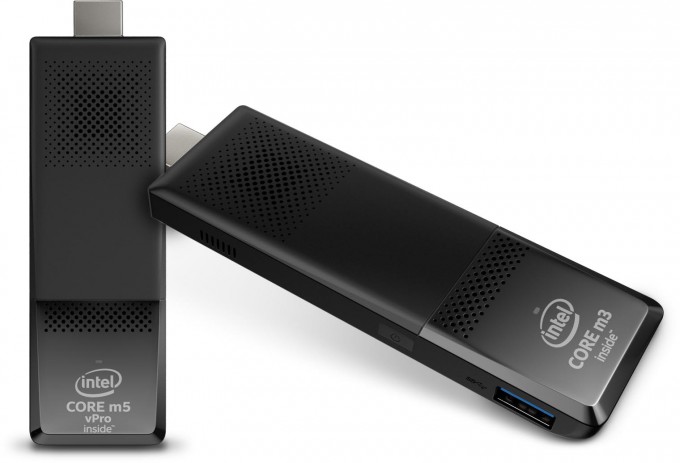 Part of the problem with the original Compute Stick was Intel’s decision to use a third-party for the wireless connectivity – a rather surprising move for a company such as Intel, which it has its own solutions for such a task. The latest generation makes use of Intel’s own wireless chipset for both WiFi and Bluetooth.

A USB 3.0 port remains on the Stick for extra connectivity options, such as external storage or a dedicated mouse and keyboard (rather than Bluetooth). The micro-SD card remains, since the internal storage for the Compute Stick is 32-64GB of eMMC – a soldered, flash-based storage commonly found in SD cards, rather than SSDs.

Intel decided to do something a little interesting too. The power supply connects to the Compute Stick via USB Type-C, and acts as both power, and as a USB hub, since there are an extra two USB 3.0 ports built into the power supply. Given the size of the Compute Stick, this isn’t terribly surprising – those extra couple of amps are likely to do terrible things the amount of heat generated.

The full feature set is available from Intel’s product brief.