With all the AMD rumors “Ryzen” to the surface lately it is easy to miss a bunch that are cropping up over on the blue side of the fence. At the top of the list, CPCHardware (French) claims Intel is cooking up some new chips to bolster its Kaby Lake offerings launched just last month.

The Core i7-7740K supposedly provides a modest 100MHz bump over the 7700K, bringing the base clock to 4.3GHz. More intriguing is the rumored Core i5-7640K, which reportedly may become the first i5 to include HyperThreading. In addition, it will bump the base clock from 3.8GHz of the 7600K to an even 4GHz. CPCHardware goes on to indicate it expects price cuts on existing chips to make room for these new models. 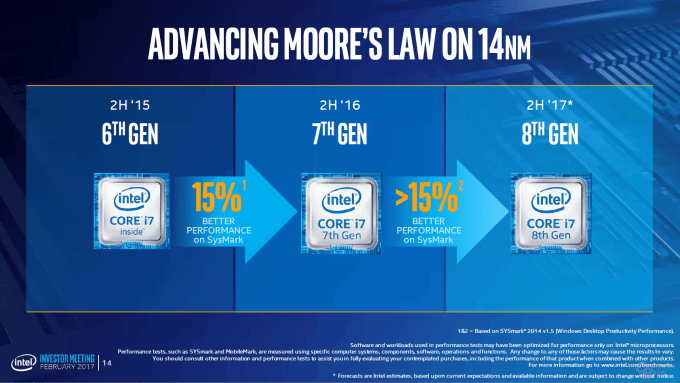 The next bit of news was picked up by The Tech Report and seems to definitively indicate the 8000-series or 8th Gen Intel processors will continue to be fabricated on a 14nm process. While Cannon Lake is supposed to be 10nm, in actuality this looks to be referencing Intel’s hastily arranged Coffee Lake parts that were added to its roadmap last year.

In effect it now appears consumers will see 14nm Coffee Lake parts sometime in the second half of 2017. Unfortunately IPC does not appear to improve as Intel itself indicates to expect roughly the same 15% performance increase we saw going from Skylake to Kaby Lake, which was based entirely on its higher starting clock speeds.

In summation Intel is already reacting to AMD’s Ryzen before it has even launched, but in the short term it appears Intel has left the door wide open for AMD to steal the show. Given the rumored Ryzen prices, purported performance, and AMD’s own claims of a smaller, more efficient die size, AMD’s prospects are looking bright indeed. Just don’t forget to stash that 25lb salt-lick block somewhere under the desk while we wait.