In a somewhat surprise announcement from Intel, details on its next range of HEDT processors have been released. Cascade Lake-X is an update to the long-running Skylake-based architecture, and is in large part an incremental update. It has many of the security protections and mitigations implemented, higher frequencies, more memory capacity, and it’s half the price of the Skylake-X CPUs. Yes, really.

Cascade Lake-X is the first time in a long time where Intel’s had to aggressively price its products, thanks in large part to AMD’s extremely competitive offerings as a result of its Zen architecture. Intel’s latest upcoming CPUs follow the same core counts as Skylake-X, although ranging from 10-cores to 18-cores.

Going below 10-cores makes little sense for an HEDT CPU, when Intel has the 8-core 9900K and KS chips, and the benefits of quad-channel memory on those platforms are limited. What’s interesting is a lack of a 16-core CPU in the Cascade Lake-X launch. Perhaps Intel sees little value in competing directly with AMD’s upcoming 3950X.

The price drop from nearly $2000 with the 9980XE, down to under $1000 for the 10980XE is the real headline here (that and trying to figure out how to pronounce 10980XE), and it’s hard not to see this as a panic button launch from Intel. Intel still has the advantage in clock speeds, but sticking to yet another 14nm launch is really costing Intel in the long run. This isn’t purely an issue about lower power and higher clock speeds that come with a process reduction, but it’s one of capacity, as Intel will now have yet another product range that it needs to fit and schedule on its already thinly stretched manufacture capacity. 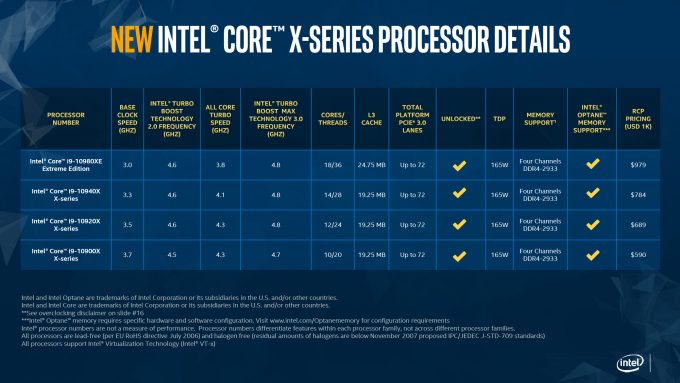 Intel’s HEDT range is more workstation than anything, and is in a very odd position compared to AMD. Quad-channel memory, 48 PCIe 3.0 lanes, and 256GB addressable memory are the main features. But Intel is pricing it the same as AMD’s consumer platform, with the 3950X being 16-cores for near the same price as Intel’s 14-core CPU. Intel’s Cascade Lake-X, as a platform, should be compared to Threadripper from a feature perspective (ignoring core counts for the time being), but since we don’t have many official details yet on 3rd gen Threadripper, it’s hard to compare directly. Maybe this is how Intel intends to market its chips, as a cheaper alternative to Threadripper, or maybe stick to the more overclocking crowd since the CPUs are unlocked. 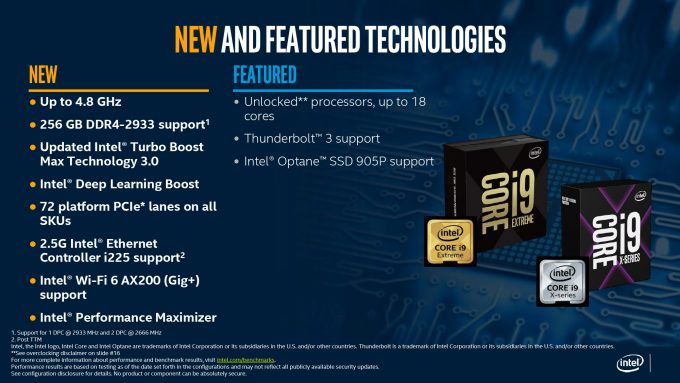 These new Intel CPUs are compatible with the existing X299 platform as well, although those four extra PCIe lanes would go unused. New motherboards are likely to be released though, but the backwards compatibility is a rare reassurance from Intel (historically speaking). Those hoping for PCIe 4.0 to be supported as per AMD’s platform, will be sorely disappointed, although this is not entirely surprising since Cascade Lake would have been in development for years.

With the help of external controllers, Wi-Fi 6 and 2.5GbE support will be coming, which will be a good opportunity for people to start seeing Intel’s latest networking support, with the 2.5GbE being of particular interest. There is also featured support of Intel’s Optane SSDs, although this probably won’t extend to the memory replacement tech just yet.

Cascade Lake-X will launch in November, about the same time as AMD’s 3rd generation Threadripper, so the next few months are going to be very interesting to see, as competition really heats up. The price drop makes these chips a lot more compelling, since the original 9980XE is a very good CPU under quite a few creative workloads, but the price limited its appeal. Even the 10900X shows some promise as a high-clock frequency 10-core alternative to the venerable 9900K, without a huge jump in price.