In the quick look we at had at Intel’s first Broadwell-based desktop chips earlier, I mentioned that its successor, Skylake, would be introducing Thunderbolt 3 support. Considering the fact that Skylake could launch this fall, Intel decided to give us the details on what Thunderbolt 3 is all about well in advance of its launch.

At the forefront, Thunderbolt 3 (which doubles as USB 3.1), offers stagging performance of 40Gbps – double what Thunderbolt 2 had, and quadruple Thunderbolt 1 (and USB 3.1, for that matter). 40Gbps equates to 5GB/s per minute, meaning that 100GB could be transferred in 20 seconds. Clearly, that’s some insane speed, but as we move towards the future, there are myriad of ways we could tap into that. 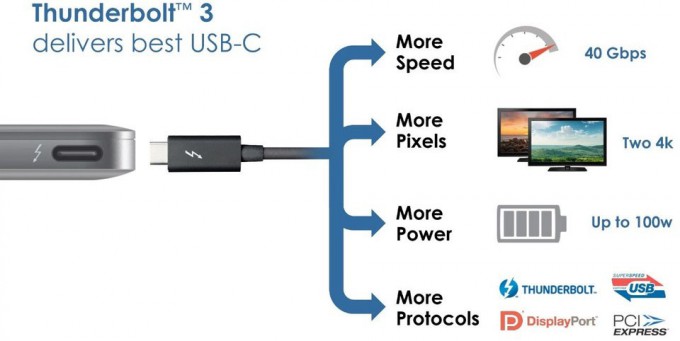 External high-end storage is of course one option, but others are the powering of multiple ultra high-res displays at 60Hz, tapping into an external graphics card to give an extra boost (could we finally see GPU docks become mainstream?), and one scenario that excites me greatly: Thunderbolt-based networking.

With 10Gbps networks proving elusive for the home market, the thought of being able to connect internal PCs with Thunderbolt is downright amazing. This is a scenario Intel isn’t oblivious to. It even promotes “10Gbps Ethernet for free” with Thunderbolt 3, and highlights the fact that this tech is OS agnostic; you could transfer at 10Gbps speeds between OS X, Linux, and Windows. I’m going to need a towel.

Here’s a full breakdown of the tech and its capabilities:

The first bullet-point references USB-C, and that in itself is a major feature here. That connector has two major perks: it’s small, and it can be plugged in either right-up or upside-down.

Beyond that, other subtle perks include the ability for notebook vendors to tap into this USB-C connector to allow charging at up to 100W, and others to create well-rounded docks that could provide I/O, video, and Ethernet capabilities. 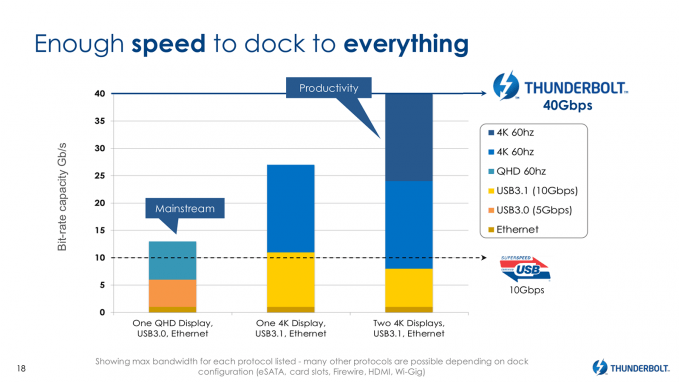 Three different cables are going to be made available for Thunderbolt 3. For those who might not need the insane speed of 40Gbps, a copper-based “lower cost” 20Gbps cable could be chosen instead. Dual 40Gbps cables will exist; one is passive and allows for cable length up to 2 meters, while the other is active and would allow for up to 60 meters. That latter cable will not be made available until 2016.

We’re not quite sure when Thunderbolt 3 products are going to land, but as mentioned before, Intel’s Upcoming Skylake processors, to be released in the fall, will support the protocol. Hopefully, released products will not be far behind.